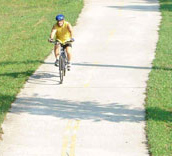 A new two-mile hike bike trail alongside State Farm Road began as a dream more than a decade ago. On Monday, it became a reality.

Hike-bike trails exist nearby, but not on that two-mile, relatively-narrow stretch of blacktop, which is particularly hazardous. In 2011, a bicyclist on the road was killed by a passing sport utility vehicle.

The North Platte trails committee started working years ago to build the concrete trail from the State Farm to Buffalo Bill Ave. After meeting with landowners and other officials, they brought the plan before the Lincoln County Commissioners in 2018.

“For years, we have looked for ways to make it safer and worked with the landowners,” Judy Pederson of the trials committee told them.

After the design work, the cost was estimated at around $250,000. The trails committee came up with a financial plan to pay $50,000 of the cost themselves and obtain the rest in a grant from the Nebraska Game and Parks Commission, under an established state program for such trails.  The county would be the agency through which the money “passes through.”

They filed an application with the state in 2018, which was ranked 4th out of 11 applications by the grant administrators. Normally, it would have received the funds, but before money was approved, funds were drastically cut so money could be used instead to repair some of the flood damage in eastern Nebraska from the infamous bomb cyclone of 2019.

The committee vowed to continue and raise the money on their own. With the help of individuals, groups, businesses and fundraisers such as bicycle races, they raised the money. Early this year, they advertised for bids for construction.

Although they hoped to build the trail this summer, they hit another roadblock. The bids were about $100,000 higher than the estimate.

So they rejected the bids, waited until the busy summer construction season was over, and advertised again.

The trail will start at the existing Buffalo Bill Road trail and run east on the north side of State Farm Road. Just before Echo Drive, the trail will cross State Farm and connect with an existing paved trail on West Central Research and Extension (aka the State Farm) property.

There is a minimum 8-foot separation between the road and the recreation trail all along the way.

Members of the trail committee were in the room when the commissioners accepted the bid and let out a collective cheer. It was the culmination of dedicated effort for a decade, and especially for the last four years, to make the trail a reality. Now, all that’s left is the construction, which is expected to begin in early spring.

Seacrest credited the persistent efforts of the planning team, the cooperation of the nearby residents, and the county. He said the local fundraising effort generated $300,000, so there will be some money left over after the concrete is poured and the trail is open.

In other business, the commissioners accepted a bid of $40,100 for three new pickups for the Lincoln County sheriff’s office. The bid is from Bill Summers Ford. The sheriff’s office is trading two used pickups for the three new ones. Officials were enthused with the relatively low cost of the trade. They said it was probably because auto dealerships cannot get new vehicles due to an international shortage of microchips, so car dealers are hungry for good, used vehicles to sell.

• Approved a new double refrigerator and single freezer for the jail, which will be located in the new storage area of the building. Central Restaurant Products of Indianapolis submitted the low bid of $14,215.

• Authorized the county roads department to buy a 1999 International water truck for $25,500.

• Signed a grant application for $1,970 that, if received, will be used to create a lawn display at the courthouse next spring during National Crime Victims’ Rights Week.

• Approved the consolidation of three lots into one in Campbell Estates Second Subdivision.