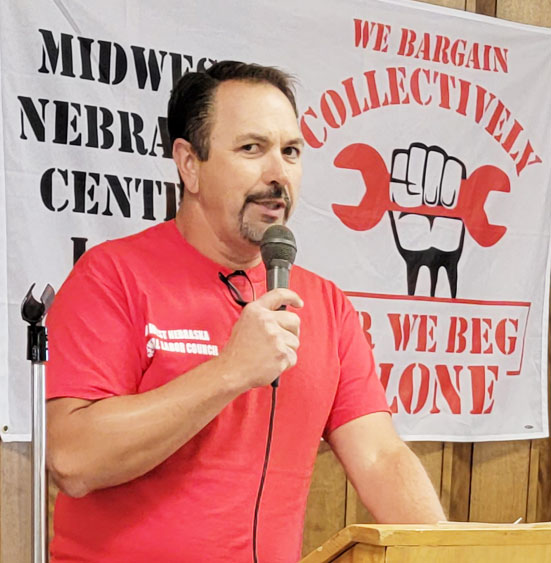 The possibility of a railroad strike has been building all summer. Workers are operating under a seven-year-old agreement that they say has been modified in management’s favor.

The issue is not really wages; it is working conditions, workers said Saturday in North Platte. Workers can be called in at any time, making family life virtually impossible. And they are being called in more frequently.

“We are working more than ever,” said a veteran employee, who asked not to be named for fear of job reprisal.

Over the past years, Union Pacific has cut hundreds of workers at Bailey Yard under its “Precision Scheduled Railroading” plan, and nearly 30% of UP’s workforce has been cut across the company. The cuts boosted the company’s profits and stock price, but the workers who remain are on the job for more hours than ever, and their schedule is unpredictable, the unions say.

In the last year or so, the company has tried to hire more workers, but they are having a hard time finding them.

A Bailey Yard employee said there are currently 60 ”borrow outs” — temporary employees from other UP operations — to keep Bailey Yard running. “Borrow outs” typically stay a couple of months and then go back.

The worker said that Precision Scheduled Railroading (PSR) was an attempt to add to corporate profits by doing more with less. Consequently, the company has tightened attendance policies, created longer trains and is talking about one-person crews.

The company puts profits before everything, he said.

Oftentimes, workers cannot attend weddings or birthday parties. And, the company has stopped using an “extra board” of workers who volunteer to work if they are needed. An employee can only take a day of personal leave if they have permission, and permission is often denied because of “the demands of the workplace,” a worker told the Bulletin.

Only two workers are allowed to be off work on any one shift in the transportation department — conductors and engineers.

“Of course, we want a fair wage and health coverage, but quality of life is the No. 1 issue,” one worker said.

“This is an exceptional time, and it calls for exceptional action,” SMART-TD President Jeff Cooley told the 50 or so workers at the meeting.

Cooley is also the head of the Central Labor Council, an umbrella organization of the unions at Bailey Yard.

Because the contract negotiations kept stalling during the summer, the negotiation process eventually came under review by a Presidential Emergency Board.

At a PEB hearing, when the railroads were asked if their record profits should be shared with workers, the railroads responded that labor from railroad workers does not contribute to their profits.

“The Carriers maintain that capital investment and risk are the reasons for their profits, not any contributions from labor,” the PEB report said.

That phrase — railroad workers do not contribute to company profits — has become a catchphrase to galvanize workers.

John Kretzschmar, who leads an institute for labor studies at the University of Nebraska at Omaha, told the audience that this is a historical time and decision. He said unions have always stood for better quality of life, while corporations always seek to maximize profits for investors.

Kretzschmar said there is a direct conflict between the unpredictable, busy work schedule and individual time for family and faith.

Kretzschmar encouraged everyone in the room to rise above the tendency to be apathetic.

“Ignoring the situation will only make things worse,” he said. ”Everyone in this room can make history. We all do better when we all do better.”

If the workers do decide to strike, no one in the room expected it to last long. Congress will likely order everyone back to work while negotiations continue, they said. The last time there was a rail workers strike, in the 1990s, the railroads were shut down for about half a day.