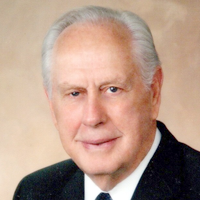 Raymond was born to Arthur and Almina Kampfe on June 3, 1925 at Gothenburg where he grew up. He graduated from Gothenburg High School in 1942 then started his career in farming and ranching.

On Sept. 19, 1954, Raymond married Betty Plank in Gothenburg and they made their home on the Kampfe family farm northeast of town. Raymond was engaged in agriculture until moving to North Platte in 1990. He then became a member of the Elks Club, Moose and Eagles and was a member of First Evangelical Lutheran Church.

After retiring, Raymond and Betty looked forward to spending time in Arizona. They also belonged to Winter Dance Club and Rock N’ Roll Dance and enjoyed the company of their many special friends.

He was preceded in death by his wife, Betty; parents, Arthur and Almina; brothers and sisters-in-law, Rev. Marvin and Helen Kampfe, Reuben and Dorothea Kampfe, Rev. LaVern and Doris Kampfe and Roger Kampfe; and brother-in-law, Curtis Wuest.

Funeral service will be 11:30 a.m. Friday, April 9 at Odean Colonial Chapel, which is in charge of arrangements, Pastor Sipes will officiate. Burial will follow in the North Platte Cemetery.

Visitation will be prior to the service at Odean Colonial Chapel.

In lieu of flowers, memorials suggested to First Evangelical Lutheran Church or Calahan Cancer Center. Online condolences may be shared at odeanchapel.com.