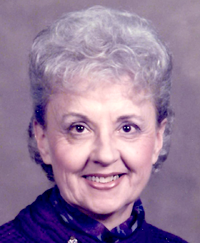 Ramona was born on Oct. 25, 1928 in Arapahoe to Willard M. and Irene Houghtaling Baxter. She grew up in Arapahoe and graduated from Arapahoe High School with top honors in 1947. While in school Ramona was involved in about every activity: music, choir, band, drum majorette, acting, cheerleader, GAA, class officer and class plays. She was voted most peppiest girl.

She attended Nebraska Wesleyan University in Lincoln, where she studied voice and music. She met her future husband at Wesleyan.

She was married to Richard Max Anderson in Arapahoe on Oct. 25, 1950. Five children were born to this marriage: Jerry, Karen, Karla, Jordan and Jason.

Ramona grew up during the depression years. She was very practical and conservative. Many stories were told about being raised in the depression. Her grandmother would find pieces of yarn, string and small cloth; they would be tied together and rolled in a ball for future use. When a pair of shoes was worn through, a piece of cardboard was cut to fit and placed on the inside of the shoe. When her grandmother’s skirts became seat sprung and worn, she turned them around and wore them backwards for every day wear.

The pride in Ramona’s home were her family antiques: a pump organ, tall secretary, matching settee/loveseat and rocker, a dining room table and matching chairs with the original white castor wheels, a 6 ½ foot high bedroom head board, foot board and side rails; the list goes on. All those that visited her home got a tour and history story about each antique item.

Ramona was born with perfect pitch and could sing like an angel. She played the piano and was involved in music all her life. She sang many solos, in duets, trios and choirs for many events. She was a past member of North Platte’s elite Monday Musicale for years and a lifelong member of the Presbyterian Church and the church choir. She enjoyed attending any function that involved band or orchestra music and of course singing. Her mornings at the kitchen table were always accompanied by listening to classical music playing on the radio.

Ramona enjoyed a longtime career in law. This 30 plus year span began at the law office of Murphy Petersen and Piccolo for about 20 years then later on working for Susan Williams. She retired at the age of 64 to care for her husband Max. It was known when family and friends needed legal advice not to call an attorney, just ask Ramona, she will know how to help you or direct you.

Ramona had a photographic memory. She could recall almost everyone she had meet plus any events and dates and the list goes on. She would write her state senators and governor on any political issues she felt needed to be addressed. She was honest, fearless, intelligent, proper and well spoken. Her wisdom had a ripple effect.

Ramona had many treasured friends. She attended many reunions in Arapahoe. She would often have long phone conversations over the phone with friends from her school days. For years she and Max entertained friends and family sitting around their big antique dining room table serving big dinners, coffees, social and musical gatherings. She looked forward to her monthly Bible study with good friends. Later in life a long luncheon with caregivers was attended. These friends Ramona meet while she cared for Max and others cared for their loved ones.

Ramona and Max were very devoted and very loving parents and grandparents. They attended every function, event, and the numerous sports activities their children and grandchildren were involved in. They didn’t think twice about driving to the western and eastern parts of the state to support their children and grandchildren. With her deep devotion to her family it was important to her to spread her lessons of life to all of them:

A Bible passage that encourages all of us to tend to our inheritance is Proverbs 6:20-22.

“My son, keep your father’s commandment, and forsake not your mother’s teaching. Bind them on your heart always; tie them around your neck. When you walk, they will lead you; when you lie down, they well watch over you; and when you awake, they will talk with you.”

Graveside services will be held on Friday, Oct. 1 at 1 p.m. at Fort McPherson National Cemetery, near Maxwell with Pastor Emily McCreery officiating. Book signing will be on Thursday, Sept. 30 from noon-7 p.m. at Carpenter Memorial Chapel, which is entrusted with arrangements.

Online condolences and sharing of memories may be expressed to the family at carpentermemorial.com.