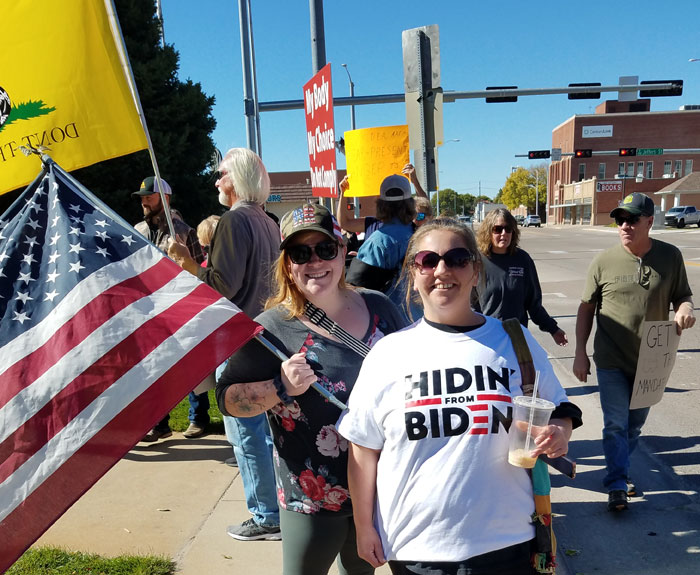 Up to 150 people were there at the height of the rally, which began around noon with a speech by state Sen. Mike Groene after welcoming remarks by Brenda Fourtner, a candidate for the legislature who described herself as a naturally private person.

“If I can do this with my social anxiety, everyone can do their part,” Fourtner said. “They are not going to give us a choice, so we are going to take the fight to them.”

“This has got to be our time,” she said. “This is our America. We are not going to let them take it.”

Groene said several state senators are responding to such outcries by asking Gov. Pete Ricketts to call a special session about the federal vaccination mandate. He said the senators’ request will go to the Nebraska Secretary of State Monday morning. The secretary will then contact each of the 49 state senators to see if they want a special session or not. If 33 senators ask for the session, it will be held. If the number falls a little short, Ricketts could go ahead and call the session anyway, Groene said.

Groene said he would not go along with any legislative bill or resolution “that does not guarantee 100% personal freedom.” He urged the crowd to stand up and fight the vaccination mandate, even if they are afraid of the consequences.

The rally was organized in about three days through social media and personal contacts, organizers said. It was sparked by railroad workers at Bailey Yard who object to the vaccination mandate.

According to a memo from the Union Pacific management, workers should start getting vaccinated by Oct. 26. The deadline to be fully vaccinated is Dec. 8.

The vaccination mandate has sparked objections across the county, including lawsuits.

In Union Pacific’s letter to workers, they said workers don’t have the option to take a weekly test instead of getting the shot. According to the letter, federal government contract workers are not allowed to “test out” of the mandate, and Union Pacific has federal contracts.

As an incentive to be vaccinated, UP management will receive vacation time and union workers will be offered incentive pay, UP spokeswoman Robynn Tysver said. Employees are encouraged to receive their vaccination outside of work; if unable to do so, they can follow standard time-off or lay-off processes.

Chris Bruns, another candidate for state legislature, told the crowd that the issue unites political opponents, and he was glad his opponent invited him to attend.

“It’s government overreach,” Bruns said. “We have to stand against it together. We stand for individual liberty.”

Bruns told the audience, “Let’s make sure they hear us.”

Other speakers said the vaccination mandate violates the individual right to make their own choices, and is bound to lead to more government control, through continued vaccination programs or worse.

Union Pacific workers are threatening to walk off the job, which if it happens, could damage the economy of western states as well as North Platte. Protestors hope businesses will join in their fight so it can be won quickly.

“How can you mandate vaccination against something that has less than a 1% mortality rate?” one speaker asked. “Vaccination should be no one’s decision except an individual and their doctor.”

Protestors carried signs that said such things as “Mandate Freedom of Choice” and “We Will Not Comply” and “My Rights Don’t Stop with Your Press Release.”

One of the sign carriers was Nichole Sanchez, who said she lost her job with Nebraska Medicine at the University of Nebraska because she refused to be vaccinated. She worked from home in North Platte scheduling patients for the med center, but was required to get her first shot by Oct. 8.

Sanchez said she and her children have antibodies, but that made no difference. There was no waiver offer. She said she probably got the antibodies when she cared for her husband and father a year ago, who both had COVID-19, without personal protective equipment. She said she was probably exposed then, although she never got sick. Recent tests show that her two children, ages 4-5, also have antibodies. She sees no need to get the vaccination now.

Speakers pointed out that the vaccines are new and can be described as experimental. They noted that Union Pacific operated for more than year through the worst of the pandemic, and now that the worst seems to be over, it makes little sense for them to get vaccinated. They suspect the underlying motivation is control, not better health.

Others said it’s about the money, and allege that hospitals receive about $10,000 federal payments per COVID-19 patient. If so, that financial incentive can inflate the numbers and severity of the situation.

Cars honked as they drove by to show support. The honks seemed to become more frequent as the afternoon progressed. The rally was widely circulated on Facebook.

Another speaker blasted the unions for contributing to the Democratic Party.

Another speaker said he has a son who recently retired from the military in “communist California,” and told his dad not to let it happen in Nebraska.

Dressed in bright red-white and blue outfits, Serafin Martinez and family of Colorado moved to Nebraska in March because they were under too much control in Colorado. Serafin worked in a can factory, making cans for pop and other drinks. He often worked overtime. He said he was relatively secluded on the job, operating a machine but was laid off because he didn’t want to comply with a mask mandate. He said it was hot in the factory and the mask irritated his face, and management didn’t have to wear them in their offices. His wife, a personal fitness trainer, lost her job when gyms were forced to close for three months.

Serafin pointed out the irony of making soft drinks essential but shutting down personal fitness.

“We are here for freedom,” he said. “We thought it would be fun to dress up and show our support.”

A prayer was said for health and courage, asking God to open doors for those who are fired or resign from their jobs, and “to shut doors that need to be shut.”

Members of the crowd who wore hats removed them to recite the pledge of allegiance, and threw them in the air afterwards.

People lined up to sign petitions that “urge our leaders to act now to uphold our Constitutional Rights.”

Fourtner said a friend has COVID-19 and after suffering at home, went to the emergency room but was turned down for the “Bam” antibody treatment because she wasn’t vaccinated. She was told to go home and take ibuprofen instead.

She said her mother-in-law was apparently over-prescribed remdesivir and her kidneys failed. Now she’s on a respirator.

Those situations motivated her to get more active, she said. She also believes the vaccination mandate is the first step of massive but ineffective government intrusion into people’s lives.

“This is not just for railroaders, it is for our nurses, all of our front line,” Fourtner said before the rally started in a Facebook post. “This is for our police. They stand with us every day. We need to stand with them too and stop hurting them. It’s go time, guys. Start calling for resignations, not just in Nebraska but all over the country. Go. I am so mad that I am forced to come out like this. Go ‘live’ on your social media. Make a big noise.”

Nebraska Television (NTV) of Kearney covered the rally, as did the Bulletin and KNOP-TV.

Melanie Standiford of KNOP-TV connected with a national program “Local News Live” and three of the speakers were able to speak to a potential national audience for a few minutes.