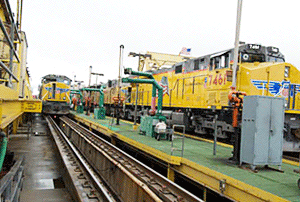 The agreement came after 20 solid hours of negotiations at the U.S. Department of Labor. It averts an imminent strike planned for Friday that would have stopped North Platte’s Bailey Yard and rocked the U.S. economy.

The Association of American Railroads says the contract will provide engineers, conductors, and signal workers with a 24% wage increase over five years 2020-24. Workers have been operating under the previous 2015 agreement because of disagreements over a contract that should have started in 2020.

The new, tentative agreement will now go to a vote of members, a process that is expected to take a few weeks.

The agreement also includes bonus payments totaling $5,000, or $1,000 per year for the five years.

According to a report by Trains magazine, the unions were also able to get concessions from the railroads on attendance policies and two-person crews, which were major sticking points in the contract negotiations that began in January 2020.

Also, there will be no increases to insurance copays and deductibles. For the first time, the unions negotiated contract language exempting time off for certain medical events from attendance policies, said the BLET (Brotherhood of Locomotive Engineers and Trainmen) and SMART-TD (Transportation Division of the International Association of Sheet Metal, Air, Rail, and Transportation Workers) in a joint statement.

Other provisions would create voluntary assigned days off for conductors and engineers working in thru-freight service, and all members will receive one additional paid day off. Members will be able to take time away from work for routine and preventive medical care and be exempted from attendance requirements for hospitalizations and surgical procedures, BLET and SMART-TD leaders said.

The White House said the deal balances the needs of workers, businesses and the national economy.