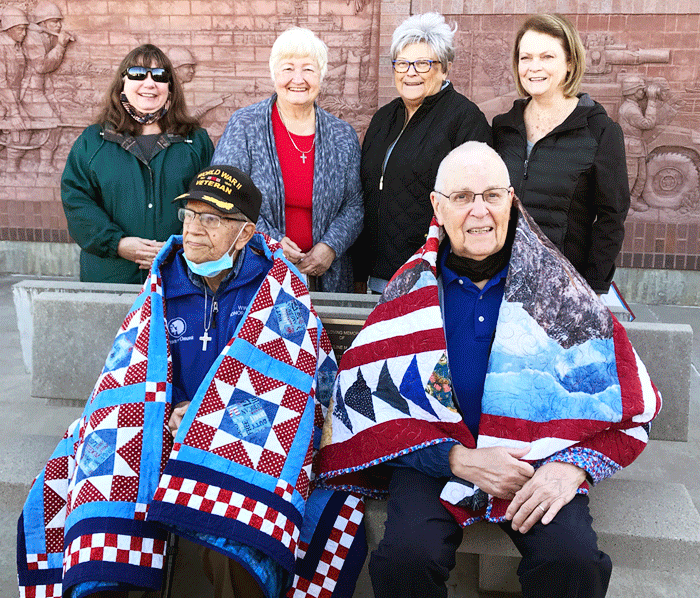 Receiving Quilts of Valor on Friday, Nov. 20 at the 20th Century Veterans Memorial were veterans Johnnie Archuletta and Gene Stadler, both of North Platte.

The ceremony was conducted by Chris Reinert, the Heartland of Nebraska Quilts of Valor representative.

Archuletta served in the U.S. Army during World War II from November 1943 – April 1946. He was drafted out of high school after an early graduation ceremony that was held so he could go to war. He also served during the Korean Conflict of 1950-51. His specialty was anti-aircraft artillery. He was stationed overseas in New Guinea and the Philippines.

Stadler served in the U.S. Air Force from April 1952 – April 1956. He was stationed in Kunsan, Korea, serving on a B26 Wing, flying mostly night bombing missions. He also served at an Air Force base in North Dakota.

“Thank you, gentlemen, for your service,” member Marilyn McGahan said.

The Quilts of Valor program was launched in 2003 by the mother of a soldier after she had a vivid dream. She knew each presentation had to be quilted, not tied, which meant hand or machine quilting. It would be “awarded,” not just passed out like magazines or videos, and would say unequivocally, “Thank you for your service, sacrifice and valor in serving our nation.”