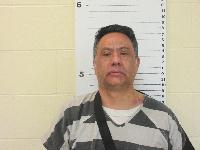 On Saturday afternoon, North Platte police arrested a suspect for allegedly trying to get into unlocked vehicles in the Wal-Mart Super Center parking lot, looking for things to steal.

Toro-Tabar, who is from Chile, was with some other men who got away, police spokesman Matt Elder said.

Elder said police were dispatched to Wal-Mart at 1:28 p.m. Jan. 9 to check out a report that suspects were going through vehicles. The 911 caller said the suspects were just leaving in a black SUV with California plates.

As police arrived, the 911 center received another report that one of the suspects was still in the area on foot, and the caller described him.

A woman at Wal-Mart said the men were seen roaming through a wide area of the parking lot, including even some cars in the pickup stalls right up front, where one of them opened the passenger door of a car, grabbed a purse and ran.

“These men were very fast and very bold,” she said on Facebook. “She (a woman going to her car) was literally just feet from her car when they ran to grab her purse.”

Police spokesman Matt Elder said officers looked around the area and found the suspect on foot in the 400 block of E. Leota. The officer tried to hail him, but he took off running, Elder said.

The man was caught after a brief foot chase. Reportedly, he carried an ID card with the name “Luca Ballarini.” Police determined that he stole the purse from the parking lot. The purse was recovered later.

While police were questioning the suspect and witness, another purse was reported stolen, this time at Gary’s Superfoods in the 1900 block of E. Fourth.

It was the same suspect, according to security video from Gary’s. The theft apparently happened before the 911 call came from Wal-Mart. The video showed the suspect walking past a shopping cart at Gary’s and grabbing a purse when the owner wasn’t looking. Police say the video showed that he tucked the purse in his jacket and left the store.

A short time later, Ballarini and an unknown man tried to use a debit card from that purse to buy items at Wal-Mart, according to the police report.

Ballarini was charged with two counts of theft by unlawful taking and obstructing a police officer. Officers weren’t able to confirm Ballarini’s identity with the ID he provided, but with the help of the Nebraska State Patrol and the Bureau of Immigrations and Customs Enforcement (ICE), it was determined that Ballarini was actually Fabian Toro-Tobar, 47, of Chile, South America.

In addition to the thefts, Toro-Tobar is charged with criminal impersonation. He was taken to the Lincoln County jail.

It is believed that Toro-Tobar was working with other men who have not yet been identified or found, Elder said.

Anyone with information regarding this incident or any similar incidents are encouraged to call the North Platte police at 308-535-6789. Anonymous information can be given by calling 534-8400 or online at www.lincolncountycrimstoppers.com

The eyewitness at Wal-Mart urged people to listen to their instincts. She wished she had called 911 when she first saw the suspicious men in the parking lot instead of waiting until she saw them a couple more times.

“God didn’t give us a spirit of fear but of power and love and sound mind,” she said. “Trust the brain that God gives you and pay attention to your surroundings.”

The woman said the suspicious men appeared to be of the same nationality.