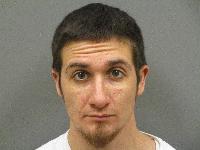 A lab test that was positive for meth led to the arrest of a North Platte man over the weekend – one of several cases that involved felony charges.

During the investigation, officers established probable cause to arrest San Suhr, 33. Suhr had left the scene before police arrived, but officers found his vehicle and pulled it over. Suhr was charged with third-degree domestic assault, police spokesman Matt Elder said.

A search of his belongings turned up suspected methamphetamine and the suspected meth was sent to the Nebraska State Patrol’s Crime Lab for testing.

Lab results later confirmed that the substance was meth.

Six months later on April 24, police saw a motorcycle, thought the driver was Suhr and confirmed it when the bike stopped in the 2600 block of W. 14th. Suhr also had a warrant for his arrest. He was taken to the Lincoln County jail.

On April 24 at 8:42 p.m., police on patrol saw a vehicle near Third and Bailey that was known to be operated by Jesse Jaurigui, 20.

Police knew that Jaurigui had a warrant for his arrest.  The vehicle pulled over and stopped in the 400 block of E. Third, where the driver got out and started walking.

Officers tried to hail him, but he ran off. A brief foot chase ensued before Jaurigui was taken into custody. After he was apprehended, police found that he had left a juvenile boy in the vehicle when he ran away. The boy was still in the vehicle, unattended but safe.

Jaurigui was taken to the Lincoln County jail, charged with resisting arrest, child abuse, and driving under revocation. The juvenile was turned over to his parents, Elder said.

On April 20 at 8:36 p.m., an officer saw a green pickup pull into the parking lot at the mall. The pickup was commonly operated by Elliot Fair, who had a warrant for his arrest, according to the police report.

The pickup parked and the officer contacted the driver, who had got out of the vehicle. The driver was identified as Shane Hermes, 28, the police report said.

Hermes was released, as officers were only looking for Fair, who was in the passenger seat. Fair was arrested for the warrant with no trouble. When the area where Fair was seated was searched, police found a handgun in a backpack, along with suspected methamphetamine and drug paraphernalia.

The police report says that both Fair and Hermes are convicted felons.

Hermes was also were taken to the Lincoln County jail.

At 9:43 a.m. on April 23, police saw a blue Honda Accord with no license plates speeding in the 800 block of Rodeo Road. Officers tried to pull it over, but the Accord sped away and police gave chase.

The pursuit continued westbound on U.S. Highway 30 with speeds reaching 115 mph, Elder said. The suspect vehicle turned off U.S. 30 onto a gravel road, with police in pursuit.  After a failed attempt to stop the car with stop sticks, the pursuit was terminated out of safety concerns. Shortly after, Lincoln County sheriff’s deputies found the vehicle on county roads near Sutherland and picked up the chase.

Another brief pursuit, it was again terminated for safety reasons, Elder said.

A little later, the vehicle was found near the Sutherland I-80 interchange, unoccupied. Deputies entered a nearby business and found the driver, Tyler Olexo, 22. Olexo was taken to jail, charged with operating a motor vehicle to avoid arrest, willful reckless driving, driving under suspension, and speeding.