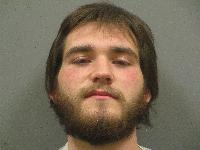 A 20 year-old North Platte man was arrested Saturday night for nearly every traffic offense imaginable after a reckless drive through the east side of town.

Police spokesman Matt Elder said at 10:35 p.m., officer went to E and Welch to check out a reported reckless driver that hit a stop sign and drove through a yard.  They didn’t find the vehicle, but they watched a video of the incident that a witness provided, which showed the vehicle was a white minivan.

Around 11:42 p.m., police saw a white minivan driving recklessly near Philip and Cottonwood. As they followed, they watched as it traveled over the speed limit and ran a stop sign, Elder said.

Police tried to pull it over near E and Cottonwood but the driver did not stop, and continued on, recklessly.

Police said the vehicle eventually came to a stop in an alley near B and Eastman.

The driver, Timothy Shannon, was taken into custody without further trouble. He showed signs of impairment, the report said.

Police searched Shannon’s vehicle and found marijuana, prescription pills and items commonly used in the distribution of narcotics. He was arrested and taken to the Lincoln County jail for further DUI testing.

Elder said Shannon became uncooperative and combative at the jail.

In addition to traffic offenses, he is charged with leaving the scene of an accident, operating a motor vehicle to avoid arrest, driving during revocation, DUI, open container, willful reckless driving, minor in possession of alcohol, refusal to submit to a chemical test, possession of marijuana with intent to deliver and possession of a controlled substance.

Shannon is held on bonds totaling $15,000, according to sheriff’s records.

Earlier that day at 4:29 p.m., police went to the top of the Willow St. overpass to check out a reported suspicious person.  They found a man, later identified as 28-year-old Michael Stroble, sitting on the sidewalk.

As police approached, they said they saw Stroble holding a syringe in his hand. He tried to break it, and then threw it off the edge of the viaduct. However, there was still a needle cap on his lap. Stroble later admitted the syringe contained methamphetamine.

Police found the syringe and Stroble was arrested. He was taken to the Lincoln County jail and charged with meth possession and tampering with evidence. His bond is set at $15,000.