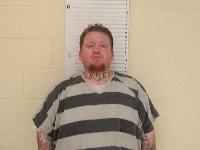 The man, Kent Smith, is charged with a late-September theft from the skill casino on East Fourth, police spokesman John Deal said.

Deal said the case began on Sept. 29 when an officer went to 1510 E. Fourth to check out a reported theft. The business owner said a deposit bag was missing that contained about $2,500 in cash, and surveillance footage showed an employee at the time, Kent Smith, removed money from the bag and spent it in several “skill machines” in the business.

Smith never returned after he left the business that day. He could not be found and an arrest warrant was issued.

Police received a tip Monday that Smith was in town at an apartment in the 1100 block of W. Sixth and found him there. Deal said he was arrested without incident.

His wife, Katie Smith, had suspected meth in her possession, as well as a pill of Lorazepam for which she had no prescription.

Deal said the suspected meth will be tested to confirm. The couple was taken to the Lincoln County jail. Kent Smith is also held for failing to appear on previous charges, according to sheriff’s records.

Cody Bayne of North Platte was arrested on Jan. 2 and charged with shoplifting from Menards as well as illegal possession of prescription pills.

Bayne is in jail, held on bonds that add up to nearly $40,000, according to sheriff’s records.

According to the police report, Bayne allegedly tried to push a shopping cart of merchandise out of Menards but left when management interrupted him. The police were called and given a description of the man and his car — a silver Pontiac Grand Am.

An officer pulled the Grand Am over later that day. Bayne was driving, and a new flashlight still in the packaging was on the floor of the car. His backpack was searched. Several pills of clonazepam and alprazolam were found, for which he had no prescription.

Bayne faces several related charges, including trespassing and driving on a suspended license.

Jesse Dorris of North Platte was arrested Dec. 30 and charged with drug possession. Police said they found a loaded syringe in his residence on Oct. 17.

Police found the syringe that day while looking for another resident of the home on a separate charge, Deal said. The home is in the 400 block of S. Walnut.