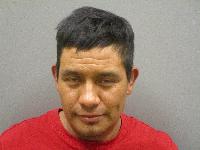 A North Platte man who got too frisky Sunday ended up in jail, facing sexual assault charges.

Police spokesman Matt Elder said at 5:33 p.m. that afternoon, police responded to a disturbance in the 800 block of S. Dewey — a block or so north of Philip Ave.

Upon arrival, police talked with the alleged victim and witnesses, who said that Jose Moreno had caused a disturbance on the property. The alleged victim had walked away from Moreno, but he followed, reached out and grabbed the victim on the buttocks.

Elder said that during the investigation, a second victim came forward and said she was also approached by Moreno earlier and as she walked away, he grabbed her on the buttocks.

Moreno was found nearby and placed under arrest.

He was taken to the Lincoln County jail, charged with two counts of third-degree sexual assault.

A North Platte man was arrested Sunday after the state crime lab confirmed the presence of meth from an item that was reportedly found in a vehicle in North Platte eight months ago.

Officers detected the odor of marijuana coming from the vehicle, giving them reason to search. The search turned up paraphernalia and suspected methamphetamine. Also, the driver gave a false name, and was later identified as Plaster.

Plaster was charged with criminal impersonation and the suspected meth was sent to the Nebraska State Crime Lab where it was eventually confirmed to be methamphetamine.

Plaster, Rivera, and Vieyra were found at various dates and apprehended, charged with possession of a controlled substance. Rivera was also charged with resisting arrest.

Vieyra was arrested on July 8, according to sheriff’s records.

A few days earlier, on July 8 at 2:25 p.m., police went to the area of 700 E. Philip to assist probation officers who were following Michael Guerra, Jr., 29. Guerra was wanted for arrest.

Officers found that the probation had contacted Guerra and he was taken into custody for a previous charge.

Guerra was taken to the Lincoln County jail for the warrant, as well as possession of a controlled substance.