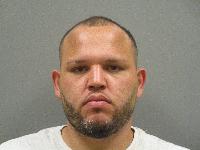 On Friday, July 9, a report was made to the North Platte Police Department alleging sexual contact between an adult man and a juvenile.

The North Platte Police Department conducted an investigation, which included interviewing the victim at the Bridge of Hope Child Advocacy Center. Based on information obtained during the investigation, probable cause was established to arrest Michael Davy, 21, police spokesman Matt Elder said.

Davy was taken into custody without trouble on Monday, July 12. He was taken to the Lincoln County jail, charged with first-degree sexual assault of a child. He faces two counts of the assault, according to county court records.

At 2:58 p.m. Tuesday, July 13, police went to the 700 block of N. Bailey to investigate a theft that reportedly just occurred.

Upon arrival, the alleged victim said he was told that his pickup door was open, and when he went out to check, he found that someone had rummaged through the pickup and his wallet was missing.

The victim saw a woman, later identified as Amanda Carlton, 39, walking away. He confronted Carlton, and told police that he saw her holding the missing wallet. He was able to get the wallet back, but the money was missing, police said.

The victim described Carlton to officers and she was soon found near Sixth and Jeffers.  As officers approached, they saw her dropping items on the ground and trying to conceal them with her foot, the police report said.  The items were determined to be a baggie of suspected methamphetamine as well as a baggie of prescription pills.

Carlton was taken to the Lincoln County jail, charged with theft by unlawful taking and possession of a controlled substance.

Police caught up with Billy Smith of Denver Thursday, who was wanted in North Platte on charges that date back to Jan. 14, 2019.

Early that morning, an officer saw a vehicle in a parking lot in the 200 block of Platte Oasis Parkway that had a license plate that had been reported stolen the day before in North Platte.

There were two men asleep in the vehicle.

The officer waited for backup to arrive and also placed stop sticks (tire deflation devices) in front of the vehicle and blocked the rear of the vehicle with a patrol car in case the occupants tried to flee.  Then they removed the driver, Michael Schrecongost, 42, and passenger, Billy Smith, 43, from the vehicle. Both men are from Denver, Colo.

Drug paraphernalia and several suspected illegal substances were found on Smith, the police report said. One of the substances tested positive for methamphetamine. Smith was arrested and taken to the Lincoln County jail, charged with possession of meth and possession of stolen property. He bonded out by paying the required 10% of a $15,000 bond, according to court records.

Schrecongost was charged with possession of stolen property.

The vehicle was impounded, and a search warrant obtained. That search turned up three firearms, more narcotics, as well as tools and property commonly used for burglaries and breaking into vehicles, the police report said.

An arrest warrant was issued for Smith for the firearm and burglary charges. He was finally found and arrested on Thursday, July 15.

Smith is also charged with failure to appear to face the original charges of drug possession and possession of the illegal license plate.

This time, bond was initially set at $100,000, according to court records.