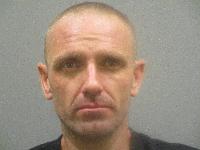 North Platte police took a suspected meth dealer off the streets and arrested several alleged felons in the latter part of July.

A couple arrests stem from events that are on the bizarre side.

The pickup was already in police custody due to a theft investigation that began on July 11, police spokesman Rory Little said. During the search, officers found two guns as well as a large amount of meth.

According to a police affidavit, a single-shot 12-gauge shotgun and a 22-caliber rifle were found, along with about 30 grams of meth.

At 10:11 a.m. on Friday, July 29, police went to a shipping terminal in the 2200 block of E. Philip and picked up a package containing slightly more than 10 pounds of marijuana.

The next Monday, Aug. 1, police acted as the delivery company and dropped the package on the front porch of the designated address in the 2300 block of E. Philip. Then they kept watch.

Little said Martinez drove away in a vehicle a bit later. Police pulled her car over and took her into custody.

One of the drivers was Ransley Foust, 23, whose driver’s license is under suspension. Foust was also driving someone else’s car. The owner was notified of the wreck, came to the scene and asked officers to search the car, according to the police report.

The search turned up a small baggie of a crystalline substance that was meth according to the results of a test that was conducted later. Foust claimed ownership of the baggie and was taken into custody without further trouble. He was held without bond pending a court appearance.

At 6:15 p.m. on July 31, police went to the 1000 block of E. Ninth to check out a reported disturbance. Once officers arrived, an alleged victim said that Broc Barker, 27, had hit them in the head with a pan, causing injury.

Officers found cause to arrest Barker but when they tried to put handcuffs on him, he fought back. After the struggle, Barker was taken into custody and put in the Lincoln County jail. He is charged with domestic assault, use of a weapon and resisting arrest. A check of his record also revealed that he is wanted in Belmont Co. Ohio.

Barker’s jail bond was set at $25,000 for the North Platte charges, according to sheriff’s records.

Other arrests from earlier in July:

Wickware was wanted on a previous charge. He taken into custody and placed in the Lincoln County jail and charged with receiving stolen property valued at $5,000 or more.

At 1:48 p.m. on July 16, police went to a home in the 600 block of N. Adams, where a few days earlier the resident had told Jon-Jay Caudillo to leave and not come back. This time, Caudillo was reportedly in the garage when police were called.

The officer confirmed that Caudillo had been banned from the property, found him in the garage and charged him with trespassing.

The next day at 11:31 a.m., police went to the Flying J Travel Center to check out another trespassing complaint.

The management told the officer that a man was escorted off the property a few days earlier by law enforcement and told not to return. However, the man, identified as Terry Barthel, came back.

Police said they confirmed that Barthel had been banned from the business on July 13. Barthel, who is listed as homeless, was charged with trespassing.

At 6:44 p.m. on July 19, police went to a home in the 1700 block of E. Fifth to check out a trespassing complaint. They met a homeowner who said they returned from a trip out of town to find Amanda Merrill and Logan Johnston inside their home. The resident said Amanda previously lived with them, well over a year ago, but they kicked her out and she wasn’t invited to return.

Police discovered that Merrill and Johnston had been rummaging through the refrigerator and eating food there. They were both charged with burglary.

At 8:21 a.m. on July 18, a police officer saw Daniel C. Smith in the 900 block of S. Tabor. The officer knew Smith was wanted for theft and burglary, so he tried to contact him. Instead, Smith ran towards the Autumn Park housing development.

The officer gave chase and soon found Smith hiding behind an air-conditioning unit and arrested him without further trouble. He faces charges of two counts of burglary, possession of burglary tools, a second offense of theft of less than $500, possession of a weapon by a prohibited person and failure to appear in court. He is held in jail on bonds totaling $35,000.