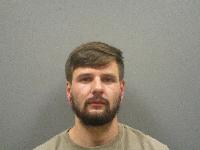 A North Platte man allegedly broke into a home early Sunday morning and wrecked the place.

The suspect, identified as Zathan Pelland, 24, reportedly broke in and then broke most of the property inside before leaving.

At the scene, police found that someone punched through a bedroom window screen and climbed into the house, injured the resident and destroyed most everything, including the television, telephone, wall hangings and collectibles.

He allegedly put the victim’s personal items, including some of the bedding, in the shower. The damages amounted more than $5,000, Little said.

During the investigation, police came to believe that Pelland was the culprit and found him sitting in a vehicle near Buffalo Bill and Birchwood. He was taken to the Lincoln County jail and charged with burglary, criminal mischief, and domestic assault.

Pelland posted the required 10% of the bond later Sunday and was released.

When they arrived, a resident of the home answered the door, then went back inside and had Steven Perez, 37, meet the officers.

Officers knew that Perez was wanted for failing to report to the Lincoln County jail on Aug. 29 to serve a 30-day sentence for driving on a revoked license and refusal to submit to a blood-alcohol test.

They took him into custody without any trouble. Bond was set at $10,000.

On Sept. 15 at 4:27 p.m., police went to a motel room in the 300 block of Holiday Frontage Road to check out a reported drug violation.

Once on scene, officers learned that Gregory Schaeffer, 62, was on the property and possibly had drugs on him. Officers talked with Schaeffer and received permission to search room and contents. They found a large baggie and a small baggie, both containing a crystal substance that tested positive for methamphetamine. According to Lincoln County Court records, police said there was about 23 grams of meth in all.