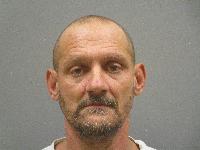 Around 5:15 a.m. on Tuesday, Sept. 21, a patrol officer drove by the Stor N Lok storage units in the 1100 block of East Seventh. The officer noticed the door was ajar on one of the units and pulled in to investigate.

Police spokesman John Deal said as the officer drove in, a man later identified as Kelub Ray left the unit and ran away. He was chased on foot and captured a short time later.

In checking the unit that Kelub was seen running from, the officer found the lock had been cut off with bolt cutters, which were left behind. Property from the storage unit, as well as two others, was found in the vicinity.

Ray was charged with three counts of burglary, possession of burglary tools and obstruction, and held on bonds totaling $75,000.

At 11:53 p.m. on Wednesday, Sept. 22, an officer stopped a green Hyundai Accent in the 500 block of West A for failure to display license plates.

The driver was identified as Ransley Foust.

While speaking with Foust, the officer noticed a knife under his leg, according to the police report.

After Foust got out of the vehicle, the officer checked under the front seat and found another fixed blade knife concealed there. Foust was charged with carrying a concealed weapon, second offense.

He also faces past charges, including trespassing, shoplifting items of $500-1,500 value, and driving on a suspended license.

On Friday, Sept. 24 at 1 a.m., an officer stopped a red Ford Explorer in the 1000 block of Rodeo Road for driving without headlights.

During the investigation, the officer was told there were illegal drugs in the vehicle and the vehicle was searched. Police found a small amount of marijuana in Smith’s purse, plus drug paraphernalia consistent with marijuana use and a Xanax pill for which she had no prescription.

Several small baggies of suspected meth were found in a backpack belonging to Canann, according to the police report. The suspect meth field tested positive.

Canann also had outstanding arrest warrants, including a charge in Buffalo County and a failure to appear charge in Lincoln County, according to sheriff’s records.

Both women were taken to the Lincoln County jail. Sheriff’s records show that Canann is held on $100,000 bond for meth possession.