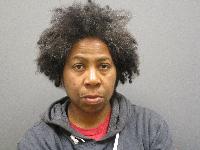 At 4:58 p.m. on Thursday, North Platte police went to the 600 block of S. Willow to check out a reported theft of some items from a motor vehicle.

Upon arrival, the alleged victim said Nicole Perez, 41, got in his vehicle and now he was missing some of his things. The man said he saw Perez in the vehicle, but she took off on foot. The victim said several items were missing.

Shortly after, police were called back to the same home, after the victim discovered the house had been broken into and items were missing. The victim believed that Perez was responsible for all the missing items.

A short time later, police found Perez. Police spokesman Matt Elder said they also found items from the victim’s vehicle on her person. And, property from the house was found nearby.

Perez was arrested and placed in the Lincoln County jail. She is charged with burglary and theft from a motor vehicle. Her bond has been set at $15,000.