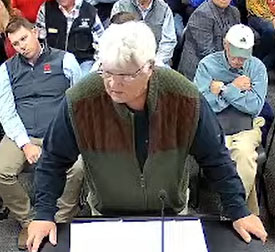 The widespread economic benefits of a new beef packing plant in North Platte loomed larger than the concerns of the residents who will be most directly affected Tuesday, as the city planning commission overwhelmingly voted for the project.

The $325 million plant will employ up to 875 people when it is in full operation and process 400,000 head of cattle per year, said David Briggs, the CEO of the company, Sustainable Beef, LLC.

The planning commission held a 2 hour and 45 minute public hearing on the project. Testimony was overwhelmingly in favor. Speakers talked about an array of beneficial impacts to North Platte, the state, the region, and the cattle industry.

Those benefits can be summed up by a projected $1 billion a year in new economic activity, according to a study by economist Ernie Goss of Creighton University.

Half of that money would directly benefit North Platte, said attorney Mike Bacon, who prepared the details of the plan for Sustainable Beef to present to city officials.

Bacon reviewed the situation and the Goss study, noting that Goss expects another 1,000 or so jobs to spin off from the beef plant, and those jobs to pay about as much as the packing plant plans to pay — $50,000 a year.

At the end of the hearing, Sen. Mike Groene said the plant would create “anchor” incomes for families and make North Platte a “two-industry town” with the potential of becoming a three-industry town if a proposed Rail Park attracts a major manufacturer.

Groene said a beef plant would fit North Platte like no other business.

“The stars are aligning in this project,” he said.

Other proponents from near and far included Nebraska Agriculture Secretary Steve Wellman, who said the plant would benefit the heart and soul of the state – the beef industry.

On the other hand, three people talked about detrimental impacts to those who live east of the plant. They raised questions about the containment and flow of runoff water, the effect on the ecology of the confluence of the Platte rivers, and the quality of life of the residents who live there.

A significant portion of the land directly east of the plant is currently owned by the Golden brothers, who built retirement homes there to enjoy sunsets, fresh air, privacy and the stars overhead, Larry Golden’s granddaughter Sophia said. She and her husband John have plans to move there. She said her grandfather has lost sleep and shed tears over the prospect of the beef plant, and not one city official or company official has come out to see the property and talk with him.

According to the plans, only one road will lead in and out of the plant, and that road will be shared by residents. Sophia Klein said the residents may not be able to get in or out of their property in an emergency because the road could be full of hundreds of employees or cattle trucks coming or going. She asked where cars or trucks would turn around if they drive past the entrance to the plant.

John Klein said he was practically born on a horse and fully understands the benefit the plant would have on the cattle business, but he questioned the runoff projections. Holding up an overhead photo, he pointed to where a natural waterway once ran, before the city built wastewater berms for large holding ponds about 40 years ago. The plant will be built on one of the wastewater berms, after it is filled with a projected $18 million worth of soil upon which the plant will be built.

Klein said the family expects that accidents will happen and blood will spill over the containment and end up at his father-in-law’s front door.

He questioned that the berms would be strong enough to contain runoff water, since they are 40-years old and were one of the criteria used to declare the land blighted and substandard.

“The process is very carbon neutral,” Briggs said. “We want to tell the world what we do.”

After the hearing, the commissioners asked a few questions about some of the concerns that were raised by the Kleins, especially the traffic. Briggs said the plant would have one work-shift, from 8 a.m. to 4 p.m., as well as a lighter shift for maintenance and cleaning. He said the primary parking lot will be on the west side of the plant, with two accesses — in and out. Also, designers have talked about building an access from the road on the east side of the plant, which would provide a place for vehicles to turn around if they miss the front driveway. But he said that is still in the discussion stage.

The commissioners also heard from the city’s contracted engineer Brent Burklund about runoff and lighting. Burklund said the plant must have containment ponds so runoff will not be greater after the plant was built than it was before. When asked about lights, Burklund said there are regulations about the amount of light that leaves the property.

The planning commission did not propose any conditions that the project must meet. No questions were asked about odors or how they might be regulated.

Groene said he travels to Schuyler and Dodge City, Kansas, two meat packing towns, and does not notice the smell. He said those towns are one-industry towns, with larger packing houses per capita than Sustainable Beef proposes.

Next, the project returns to the Community Redevelopment Authority on Monday, Nov. 29. The CRA is expected to advance the proposal to the city council for consideration of $21.5 million in tax increment financing on Dec. 7, Zoning Administrator Judy Clark said.

That would be the last hurdle the project faces to be approved by city officials.