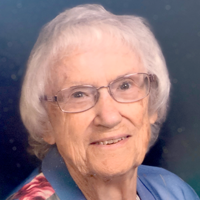 Phyllis Eilene Priest, a child of God, was born in a sod house in Ringgold on Feb. 4, 1928 to Charles E. “Ed” and Hazel “Winters” Daly. Her first year of school she attended at the Cheyenne River School, in Wyoming, then they moved back to McPherson County Nebraska where Phyllis was raised and graduated from McPherson County High School, Tryon with the class of 1945. She had earned a three-year teaching certificate and taught school as soon as she graduated from McPherson High.

On Oct. 18, 1946 she married Hermel Priest at her parents’ home in Tryon. Hermel died June 15, 1995 at his home in North Platte. To this union five children were born, Sherry, Wanda, Rita, Rusty and Janice.

Phyllis gave her life to Jesus on March 1, 1959 and was baptized in the Saline River in Missouri. She was a member of the First Christian Church in North Platte and the American Legion Auxiliary.

Along with teaching school, Phyllis worked with Hermel at their service station in Missouri and when they moved back to North Platte, she went along with Hermel on his daily bulk milk route. She’ll always be remembered by the beautiful quilts she made, her love of music and her infamous rolls that everyone loved.

Her children, grandchildren and great-grandchildren were so precious to her and she loved seeing them and spending time with them. Phyllis will always be remembered as a wonderful mother and a great friend to many.

Services will be held 1:30 p.m., Wednesday, March 31 at First Christian Church with Rev. John Stone officiating. Burial will follow at Miller Cemetery near Tryon. Adams & Swanson Funeral Home is in charge of arrangements. The service will be livestreamed on the Adams & Swanson Facebook page for those unable to attend.

Memorials are suggested to Great Plains Hospice or the donor’s choice in Phyllis’s memory.