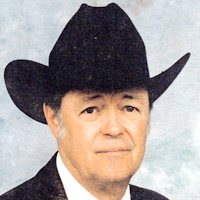 Phillip Merrill, 88, of Hershey died at home surrounded by his family on March 28, 2021 after a hard six year battle with cancer.

Phil was born Jan. 15, 1933 to Ray and Ruth Merrill at Oshkosh and the family lived on a farm north of Sutherland. Phil attended Sutherland High School where he was active in all sports and excelled at singing.

He won first place for his solos at the District Music Contest held in Hastings and during his sophomore year he sang in the National FFA choir at the FFA National Convention held in Kansas City. After graduating in 1951, Phil moved to Denver where he worked on the ground crew at Stapleton Airport.

On June 29, 1952, Phil was united in marriage to his high school sweetheart, Marian Kuenle, at the Hershey Methodist Church. Their union was blessed with three children, Mike, Martin and Karen, and the family lived on a farm east of Hershey.

Phil had a passion for music. He began playing the guitar when he was 14 and later played guitar and sang with the Hadley Barrett Band. In 1960 the family moved to the Denver area so Phil could continue with his music.

As much as he loved music, Phil’s family meant everything to him. He enjoyed their school activities and spending lots of time together in the mountains camping, hiking and fishing. Phil and Marian also liked riding their bicycles on their many trips and they even rode over Loveland Pass, which is almost 12,000 feet.

Over the years Phil operated a horse boarding business and trimmed and shoed horses, and was an over-the-road truck driver. He received an accommodation from the Colorado State Patrol for his kindness to strangers, which included a state patrolman and five others who were stranded in their cars during a severe blizzard.

In 1990 Phil and Marian bought the Kuenle home farm near Hershey, which had been in the family since 1907, and completely renovated the two story farmhouse which was built in 1914 by Marian’s grandparents. They were later recognized with the Nebraska Heritage Farm Award for the farm being in one family for 100 years.

In October of 2017, Phil was inducted into the Nebraska Country Music Hall of Fame. He was a wonderful husband, father and grandfather and took great pleasure in his two sons and four grandsons playing music.

Phil is survived by his wife of 68 years, Marian of Hershey; children, Karen (John) Brinkley and Michael (Laura) Merrill, both of Golden, Colo. and Martin (Sara) Merrill of Carbondale, Ill.; brother, Larry (Marge) Merrill and sister, Phyllis (Harlan) Dancer, both of Sutherland; six grandchildren; a great-grandson; and other family.

He was preceded in death by his parents, Ray and Ruth Merrill; and grandson, Richard.

In keeping with Phil’s wishes, cremation was chosen. A gathering of family and friends will be 2 p.m. on Friday, April 2 at Odean Colonial Chapel, which is in charge of arrangements.

The memorial book may be signed at odeanchapel.com or from 10 a.m.-6 p.m. Thursday at the funeral home.

In lieu of flowers, memorials may be sent to the Hershey Methodist Church at PO Box 207, Hershey, NE, 69143.