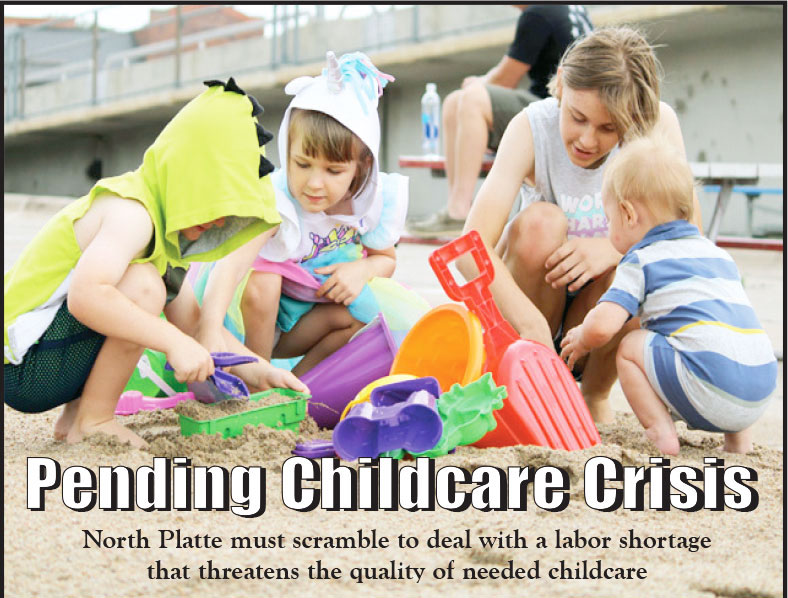 The worker shortage in North Platte became an especially harsh reality recently for 100 or so families, when the Kids Academy childcare center closed.

The academy, located near the hospital, took in about 120 children on a normal day while their parents were working. At one time, the academy stayed open as late as 11 p.m., taking care of children during two work shifts, six days a week. But, by the time the academy closed, it was down to one shift, five days a week. Finally, it could no longer keep enough employees to operate.

The closure put an immediate strain on families and other childcare providers in the city, most of whom are already operating at capacity, facing challenges to keep their employees.

“We have a waiting list of more than 20 families,” said Rebecca Fahrni of Parkview Kids Christian Learning Center, talking to the Bulletin on Sept. 21.

There are 29 licensed childcare providers in North Platte. Or there were that many a few months ago. Closures due to staffing issues are taking a toll.

As Parkview’s executive director, Fahrni is responsible for the overall operation. When an employee is missing, she takes their place.

“Staffing has always been a bit of a challenge, but we’ve normally had applicants,” she said. “But it’s been incredibly difficult for the last two months or so. People can go somewhere else and make $12-13 an hour. We start at $9-9.50 an hour, and it’s challenging work; we are active all day. We get down on the floor with the kids, and we deal with their behaviors.”

Fahrni is proud of the quality of the care at Parkview, which goes far beyond babysitting. The care is tailored to meet the child’s social and emotional needs.

“They are so vulnerable at that age,” she said. “They are soaking things up like a sponge. We help them learn how to interact, to collaborate and control their emotions.”

Fahrni said childcare workers deserve more pay, but that would mean raising rates for families and she is well aware of the families and how hard they work already.

Diane Livingston says North Platte childcare is facing a crisis that is bound to worsen, especially if the population grows, with new stores and businesses on the horizon.

Livingston is the executive director of Community for Kids, a non-profit dedicated to easing the crisis and increasing the quality of childcare throughout the community.

She said nearly every childcare provider in town has a waiting list – one of them has 27 families waiting.

She said the first step is to raise the public’s awareness.

“Unless you have a child in daycare, you are not really aware of the situation. That’s the first step. Then we hope to find creative ways to solve the problems,” she said.

Jennifer Koubek, who operates the Koubek Family Childcare, takes care of 12 children with the help of two part-time employees. She has 12 more children on the waiting list.

“I am lucky to have enough staff to take care of the children we have now,” she said. “It’s getting rough. Some parents now can’t go to work because they can’t find childcare. I don’t know how the hospital is getting along. They are working long hours over there.”

“We are not just housing kids,” she added. “We work with them.”

Koubek participates in a “Step Up to Quality” program from the Nebraska Department of Health and Human Services, and the “pyramid model” with the North Platte school district.

She also said her families have been great to work with, even contributing financially when she had to cut back a few months ago due to COVID-19. Nevertheless, she realizes that some good quality childcare providers are getting burned out.

Livingston meets with city leaders, business leaders and civic groups, looking for a way to deal with the situation and improve upon it, even in these stressful times.

A former educator, she knows that childcare providers are really teachers who are educating and modeling behavior for the children they serve.

The first 5-8 years of a child’s life are the most formative. Ninety percent of the brain’s growth occurs in the first five years.

Without dependable childcare centers, many parents are absent in the workforce. Those who work, ask for more time off.

Children in quality childcare are 70% less likely to be involved in violent crimes or to rely on government services as they grow. They are less likely to drop out of school or to need special education.

Livingston said the solutions will evolve with increased awareness and research, if the community comes together to work at it. She said the Legislature is also looking at the challenges statewide, but it could take years for new state requirements, or financial assistance.

She notes that a preliminary study shows that the average charge for childcare in North Platte is lower than in Grand Island, Hastings, Kearney and Norfolk. She said that might have to change if childcare is to improve in our city. But the first step is for the general public to understand the situation.

(This report was first published in the Bulletin’s Sept. 22 print edition.)