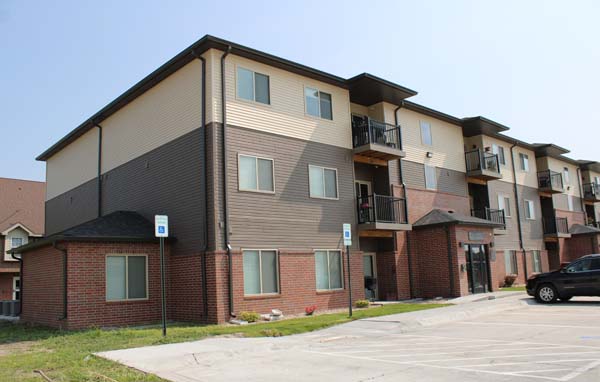 Ceremonies were held Tuesday to celebrate the construction of Victory Village on Lakeview Blvd. as well as the grand opening of the Pacific Place apartment complexes.

The groundbreaking at the construction site of what will soon be the Victory Village on Lakeview apartments started the day.

The groundbreaking was conducted after representatives of the project’s development teams spoke and thanked the community and everyone involved in the construction process.

“We are especially grateful for all the chamber members. They form such an important part of the backbone in this community, and we appreciate that,” Reilly said.

The two-phase project is paid through the Nebraska Rural Workforce Fund, making it the largest housing project supported by that organization.

Construction on the complex began in February and developers are hoping to begin moving residents by late November. After both phases conclude, the complex will be comprised of 8-plex multi-family buildings, with a total of 160 homes.

“It’s something we need; we can’t grow our community if we don’t have places for people to live,” Kelliher said. “This will provide lots of units for people who are going to move to North Platte to fill jobs. We’ll have new people who come to town for jobs at the hospital, railroad, Wal-Mart or any of the other things that are being proposed in our community. We won’t get those jobs unless there are places for people to live.”

The project is in its first phase, which includes the construction of 80 units. A clubhouse and amenities such as a pool is anticipated to be constructed by the end of the year for residents to enjoy next summer.

“If the legislature can keep finding money, which I think they’re going to do, I think the local communities (across Nebraska) can cobble together the funds to match, because they can’t do it on their own,” Foley said. “These are some of the first projects that are coming to fruition as the result of the new legislation (Rural Workforce Housing Act) and that’s really exciting to see happen, because it’s addressing a critical need.”

As the groundbreaking concluded, those in attendance were invited to tour one of the units that is under construction before making their way to the Pacific Place apartment complex for a ribbon cutting.

Once again, Person, Kelliher and Foley spoke about the newly finished project and were joined by the General Counsel for Perry Reid Properties, Tom Huston.

The new apartment complexes were built on excess land that was purchased during phase 1 of the project in 1988, funded by low-income housing tax credits.

Construction of the complexes concluded in the last two weeks. There are two buildings with 24 units each, offering one- and two-bedroom options.

Tax Increment Financing (TIF) of $850,000 through North Platte and the Community Redevelopment Authority helped pay for the public improvements, such as site preparation, grading and facade improvements.

“We try to keep the rents affordable for the workforce — that’s really the intent,” Huston said. “There’s a high demand for housing and we think we deliver a good product at a reasonable price and provide good support for our residents.”