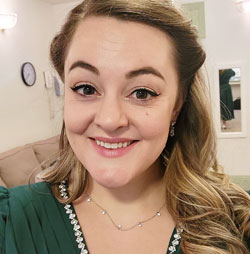 Jessica Shore of North Platte took second place in a qualifying round of Rosebud Casino’s Karaoke Contest on Jan. 14.

Shore sang Black Velvet by Alannah Myles and impressed the crowd and judges with her sultry voice.

Jessica is a frequent performer at the North Platte Community Playhouse. She appeared in musicals including The Sound of Music, Fiddler on the Roof and Into the Woods. Most recently, she performed in The Canteen: A Sentimental Journey in December.

Jessica began singing at a young age. Her fifth-grade teacher Willa Brinkmeyer inspired her to try out for musicals. Brinkmeyer directed the first show Jessica was in. She played a caroler in Meet Me in St. Louis.

The Rosebud karaoke contest consists of two qualifying rounds. Four performers from each round will be entered into a final competition. The second round will be on Saturday, Jan. 21.

Jessica plans to return to the finals on Jan. 28, where she will compete against seven other contestants.

The Rosebud Casino is just north of Valentine.