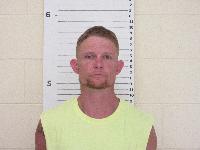 A North Platte man was first warned, and then charged Tuesday afternoon with causing a disturbance, but even though he was cited, he didn’t calm down.

According to a sheriff’s statement around 4:30 p.m. on Nov. 23, Lincoln County deputies were asked to check out a disturbance at a trailer park at 4005 Rodeo Road.

The caller said a tenant of the park was driving an all-terrain vehicle around the court, causing a disturbance. Deputies responded to the complaint and warned the man.

About 10 minutes after deputies left, another call came from the trailer park, that the commotion was continuing. This time, deputies met the same man and several others the roadway, and determined that Michael Mengelkamp, 39, of North Platte created a disturbance, according to the statement.

This time, Mengelkamp was cited for disturbing the peace and released.

Around 6:07 p.m. in the evening, deputies received another call, this time about a disturbance near the residence of the owner of the trailer court. Mengelkamp was reportedly driving a pickup recklessly and trying to run over people in the area of 14th and Dodge.

This time, deputies took Mengelkamp into custody. He was charged with willful reckless driving, attempted second-degree assault, tampering with a witness, resisting arrest and assault on an officer with bodily fluid.

Mengelkamp was taken to the Lincoln County jail. Alcohol was involved and more charges may be filed, the sheriff’s office said Wednesday.