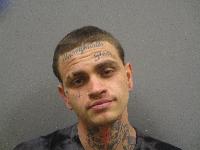 On Nov. 10, police went to the 600 block of E. Francis, in the area of the South Cottonwood Plaza, to check out a reported theft.

When they arrived, they met an alleged victim who said a purse and other personal belongings were stolen from a vehicle while it was parked in the parking lot.

Police spokesman Matt elder said officers watched a security video from the area that showed a man get in the vehicle and leave the area on foot with the purse.  Police searched the area but did not find the suspect at the time.

However, the next day, Nov. 11, police received information that the suspect was possibly on foot in the 2300 block of East Fourth.  Officers arrived and saw a man who appeared to be the suspect in video. Elder said the man was wearing the same clothing that was seen in the video.  He was identified as Wyatt Opalinski.

Opalinski was charged with the theft and taken into custody.  A subsequent search of his person yielded suspected methamphetamine and knives, one of which was concealed in his waistband.

He was charged with carrying a concealed weapon, and meth possession as well as theft and incarcerated at the Lincoln County jail. Bond was set at $15,000.