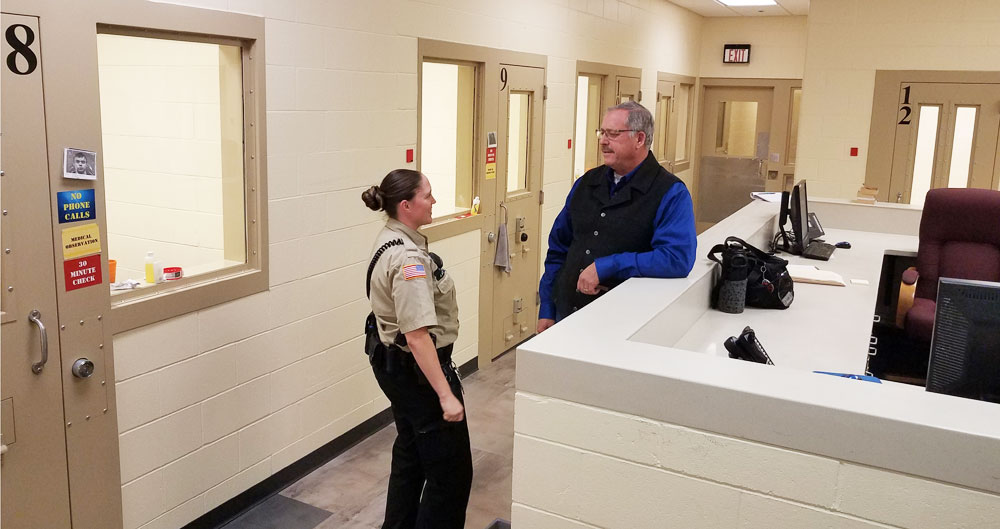 After more than a year of construction, a $5.1 million addition to the Lincoln County jail opened Wednesday, and it was immediately occupied.

A dozen “contract prisoners” were booked on opening day – nine state prisoners and three from other counties.

The new section expands the jail by about 25% with 52 more beds in two “pods.” One pod holds 32 prisoners and the other pod, 20 prisoners. And, more are coming, Lincoln County Sheriff Jerome Kramer expects more contract prisoners any day, primarily from Nebraska’s overcrowded, understaffed prisons in Tecumseh and Lincoln.

The state of Nebraska pays Lincoln County $80 per day per inmate. The new addition is expected to generate more than $1 million a year for the county.

The contractor in charge of the project was Brown Construction of Kearney, which submitted the low bid. The architect was TreanorHL of Denver, the firm that designed the jail and sheriff’s office when it was built 10 years ago.

Jerry Woodruff, the county commissioner’s point man on the project, said Brown was a high-quality general contractor, very easy to work with.

Besides the new pods, the booking area of the existing jail was also remodeled. An interior wall was removed and seven new holding cells were added, where prisoners stay for observation after arrival. The cells are visible from the booking desk. Often prisoners stay in the holding cell for 3 days to detoxify, coming off drugs, Kramer has said.

Also, new flooring was installed in the high-traffic hallway, two fire protection doors were added to meet the building code requirements that were added in the past 10 years. Also, a new storage area was built on the south end of the building.

Wooduff said the final cost will be close to $5.1 million when the last payments are made. He said there were some things discovered along the way that needed to be changed a little. Initially, there were issues with the base soil that delayed the start of construction. But Brown found a remedy that benefited the project and made up for lost time.

Woodruff emphasized that a number of local subcontractors and businesses did excellent work.

“It makes me proud that some of the money that was spent stayed in the community, and the local businesses did a great job,” he said. “They are a credit to their profession and the area.”

The concrete floor in the new section became a concern, county officials said during a Nov. 1 discussion at the commissioners’ weekly meeting. The finish of the concrete was inadequate. Hartley Painting of North Platte stepped in at the last minute to grind and reseal it so the new pods could open before prisoners arrived.

Kramer said there are a few things that remain to be done, including new flooring in the kitchen, plus one of the most humanizing features of the jail — assigning cats to the new wing. Cats in the inmate’s quarters of the jail provide companionship and relieve stress and boredom.

Kramer said another stress reliever are video screens in each of the new and old pods, which connect inmates to family and friends without requiring loved ones to make a special visit.