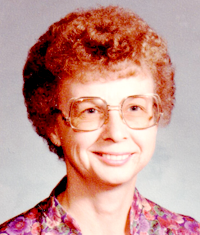 She was born on Oct. 31, 1938 to Carl and Clarice (Gordon) Olson in Emmons, Minn. At an early age the family moved to Dresden, Kan. and then to Wellfleet where she attended school through the 8th grade.

She then attended high school in North Platte living and working for room and board, graduating in 1957. Upon graduation she attended Kearney State College earning a two-year teaching degree. She began her teaching career in Grant teaching the 6th grade.

After teaching in Grant for three years during which she took summer classes, she returned to Kearney State, earning her Bachelors Degree in Education. She was then hired to teach at Jefferson Elementary in North Platte.

It was at this time she was to meet and marry her husband of 56 ½ years, James Catterson. Between raising a family and teaching, she taught a total of 30 years at Jefferson and McDonald Elementary, retiring from education in 1998.

After retirement, Nellie enjoyed traveling with her husband and friends to different places in the U.S. and other countries. She greatly enjoyed her volunteer work with MOPS and The Bridge of Hope and working with young children. She and her husband also enjoyed delivering Meals on Wheels for a few years as well.

Nellie was a people person and never knew a stranger. If she didn’t know someone, she would introduce herself and start up a conversation.

Nellie was an active member of the local DOES Chapter and then joined the Ogallala Chapter and drove after the North Platte Chapter folded. She was also a member of chapter GO of the PEO organization and United Methodist Women.

Funeral service will be at 11:30 a.m., Monday, July 19 at the First United Methodist Church with Rev. Dr. Douglas Delp officiating. Visitation will be from noon-7 p.m. with family receiving friends from 5-7 p.m., Sunday, July 18 at Carpenter Memorial Chapel, which is entrusted with arrangements. Burial will be at 1 p.m. at Fort McPherson National Cemetery near Maxwell. The service will be livestreamed via Carpenter Memorial Chapel’s Facebook page.

Memorials are suggested to the North Platte Shrine Club Transportation Fund which transports children and their parents free of cost to various Shrine hospitals in the U.S. Online condolences and sharing of memories may be directed to carpentermemorial.com.