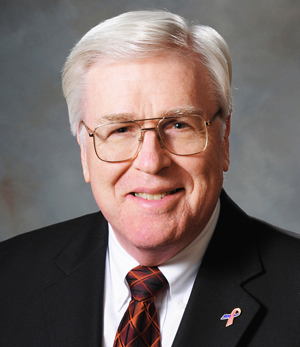 After a decade and a half representing western Nebraska on the University of Nebraska’s Board of Regents, Vice Chair Bob Phares of North Platte announced Thursday that he will not seek a fourth term on the board.

“Serving as western Nebraska’s voice on the Board of Regents has been one of the greatest honors of my life,” Phares said.

Phares started with the board with the goal of strengthening the university to retain Nebraska’s brightest students, increase affordability and build a bridge with businesses.

“I’m proud of the strides we’ve made toward that goal,” Phares said. “Over the last decade, the University of Nebraska has seen unparalleled growth and success, among key metrics.”

Phares was elected mayor of North Platte at the age of 28, which made him the youngest mayor of a first-class city in the history of Nebraska at that time.

He served two terms as mayor. He returned to elected office on the NU Board of Regents after he was appointed to represent District 7 by then-Gov. Dave Heineman in 2006.

Phares and his fellow regents have cut average annual tuition increases by more than half — from 8% to 3.5%, giving the University of Nebraska the lowest in-state tuition rates of Big Ten institutions, he said in the announcement. This year is the second in a row where the university froze tuition, with no increase for next year.

“The future of our university is bright,” Phares said. “Looking ahead, I am confident the University of Nebraska will continue to reach new heights of success for Nebraska students and families under the leadership of President Ted Carter.”

Phares has twice served as chairman of the Board of Regents, in 2010 and 2015, and was elected vice chair in February 2021. In accordance with board policy, he will serve as chair in 2022 — his final year on the board.

He was president and owner of Phares Financial Services, Inc., a financial planning and insurance firm in North Platte. He is semi-retired. His son, Brian, assumes the president’s role.

He has been married to his wife, Margene, for 61 years. They have three children and five grandchildren.