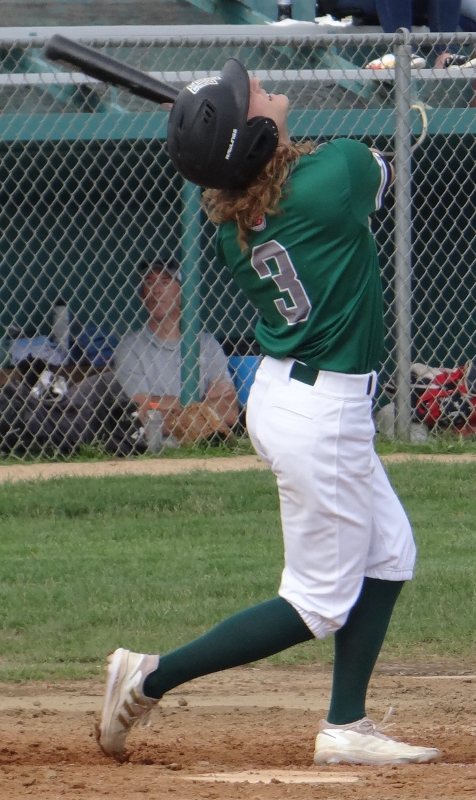 Braden Hendrix looks up at a foul ball he hit in the first inning of game one.

The Nebraska Prospects swept the North Platte Plainsmen Thursday in the last two home games of the year, 9-5 and 8-6.

The Nebraska Prospects, a travel team of in-state current and incoming college players, scored the first two runs of the doubleheader when Ryan David singled up the middle in the first inning.

The Plainsmen (30-20) got on the board in the third when Sage McMinn hit into a double play with the bases loaded and no one out, driving in a run on the fielder’s choice.

But in the fourth, the Prospects erupted. J.D. DiPrima hit a double to right-center to make it 3-1. Then Tre Mungin and Cam Madsen each followed with RBI singles.

Two more runs scored when Nolan Brown reached base on an error by third baseman A.J. Lausten, effectively knocking Plainsmen starting pitcher Micah Ford out of the game. The Prospects scored another run in the inning as Ford’s replacement, Asher Hastings, threw a wild pitch.

And, the Prospects added another run in the fifth to make it 9-1. The Plainsmen showed some life in the sixth inning when they scored four runs against relief pitcher Jayden Adams. But the Prospects brought in Sam Dovony in the seventh and North Platte couldn’t score against him.

In game two, the Prospects scored the first run in the first inning when Brown hit a sacrifice fly to right.

In the bottom of the first, the Plainsmen went on the attack. They tied the game when Braden Hendrix sacrificed himself with a ground ball to second base with one out. They took the lead when McMinn singled up the middle. Then Myles Proctor singled to left to make it 3-1.

But North Platte’s lead didn’t hold for long. The Prospects scored on a Madsen sacrifice to second base with one out. Then they tied the game on a wild pitch by Preston Davis.

The Prospects regained the lead in the fourth when Cade Lynam hit an infield single. Davis walked Joel Benes to force in another run and he was relieved by Caleb Bunch.

Against Bunch, the Prospects scored another run to go up 6-3. Then they scored two more runs against Adam DeBoer in the seventh.

Down to their last out, the Plainsmen scored three runs when McMinn got a single and Prospects pitcher Jayden Payne threw the ball away. But Payne got the last batter out to pick up the complete game victory and finish the sweep, not only for the doubleheader, but for the series for the Prospects.

In the first game of the series on Wednesday, the Prospects defeated the Plainsmen, 7-4.

The three straight losses by North Platte drops them to third place in the Nebraska division of the Independence Baseball League for the second half behind, the Fremont Moo and the Western Nebraska Pioneers.

The Plainsmen will finish the season Friday and Saturday with games against the Gem City Bison in Laramie, Wyo.