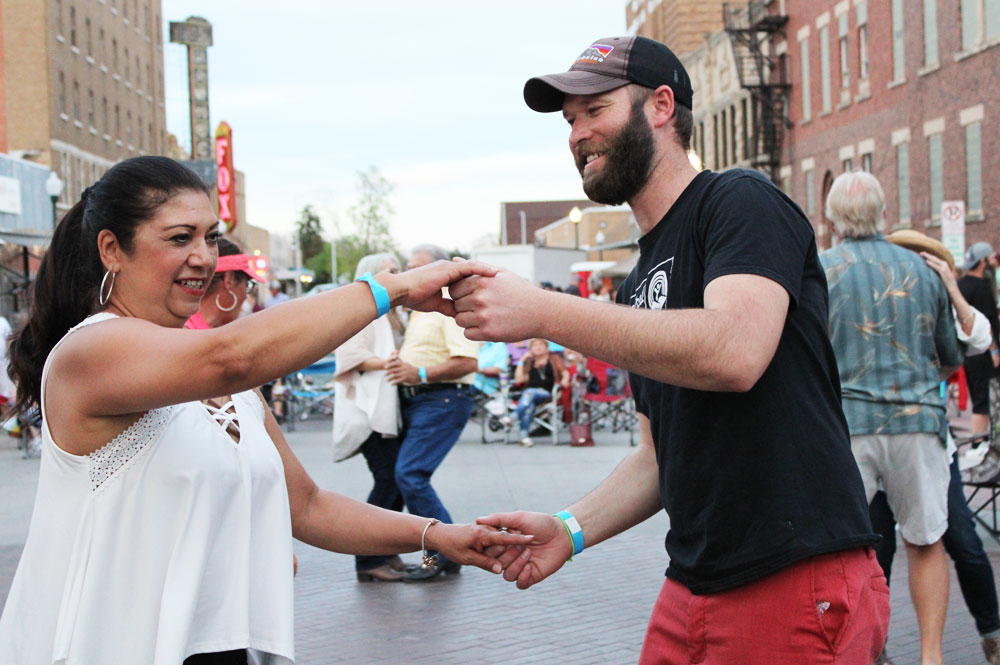 Happy dancers on the main intersection.

Music on the Bricks

Music and good times filled North Platte’s downtown district this weekend at the annual Music on the Bricks festival.

The two-night event began Friday at the Espresso Shop where The Platinum Pearls and Kim Baxter played for a full house. Those in attendance were greeted with nearly three hours of popular rock, folk, country and original songs, and the shop provided homemade Tastee burgers and Chicago-style hot dogs.

For some, this event served as a return to normalcy after the COVID-19 pandemic. Not only did North Platte residents attend, but people from surrounding areas made the trip into town to see what the excitement for themselves.

“This is my first year, but I’ve always wanted to hear Dr. Baxter sing,” said Mary Beshaler of Arnold.

The second day of festivities drew 1,100 people under a summer-time sun with light cloud cover. Many in the audience jumped up to dance to Top Shelf Country, a five-piece band.

Again, the Platinum Pearls opened the show, playing a spirited set of pop standards from the 60s-80s. Next, Kim Baxter and his daughter Mikaela performed, joined by special guests Brian Baxter on keyboards and vocals, and son Brandon Baxter on saxophone.

The audience continued to grow as the afternoon came to a close.

Guitar phenomenon Jack Bunger & the Prose rocked through a rousing set, closing with a Led Zeppelin song, Been a Long Time.

The audience demanded an encore.

The newly formed band Straw Bone closed out the evening with a wide variety of smooth rock songs and a touch of jazz, including music by Steely Dan, the Beatles, Marvin Gaye and Jackson Browne.

In addition to the live music, vendors and food trucks sold merchandise and refreshments.

Children played games in a dedicated area, with face painting, and some adults enjoyed the bean bag toss. As the sun started to set, Top Shelf Country came on and couples two-stepped and waltzed in the main intersection downtown.

Around midnight. the show came to a close.

“It’s fun to be with friends and it’s fun to finally get back to some social life,” Beshaler said. “I was happy to come.”

Organizer George Lauby of the Bulletin said the turnout was heart-warming.

“We aimed to provide a good atmosphere and fun for the family in the core of our community,” he said. “We celebrate all we do in North Platte. Dozens of people worked together to make it happen and the turnout was terrific. We are all happy about it.”

Photos by Sophia Walsh. Tap on images to enlarge.