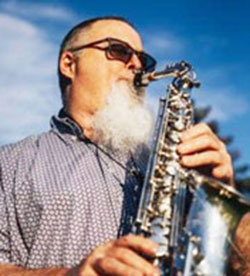 Music on the Bricks to feature Stan Raetz

Stan Raetz grew up in North Platte and went away to become a nationally known musician. On Friday-Saturday, he will return.

Playing with four live bands, Raetz will head a lineup of live music at the sixth annual Music on the Bricks festival, downtown on Dewey St.

Raetz began playing the saxophone in grade school in North Platte. He studied under Larry Romeiser and Virgil French. By the time he was in junior and senior high, he was playing with bands at venues around the North Platte area.

He earned a bachelor’s degree in music education at the University of Nebraska, and then a Master’s in music performance at the University of Northern Colorado. He has backed famous performers such as the Temptations and Melissa Manchester and played in bands for the Art Linkletter and Milton Berle shows and he performed with noted jazzman Jay McShann of Kansas City, who helped Charlie Parker get his start.

When Raetz comes back to North Platte to see friends and family, he often goes downtown to play his sax in the evening, just to hear it resound off the buildings of his hometown. He can play all kinds of music and continues to perform frequently. He currently is in two bands in the Lincoln and Omaha area.

Raetz taught music in public and Catholic schools for 37 years. He is excited about performing in his hometown.

The music starts Friday evening with Kim Baxter and Co. – daughter Mikaela and Fred Schlickbernd on drums and Raetz on horns. The show will be held outdoors on Dewey St. this year, near Good Life on the Bricks. The restaurant will offer food and refreshments.

Baxter is well-known and loved for the songs he covers, as well as his originals such as Nebraska Sky.

Formed in Kearney in the spring of 2020, Wild Roses has risen to be a key player in the Nebraska rock scene. With live shows, the self-recorded “Wild Roses EP” and another studio EP on the way, the band has driven into the broader mix.

With a sound and style reminiscent of classic ‘70s and ‘80s hard rock, Wild Roses bring their own twist to the genre with fast-paced original songs such as Rock This Town, while keeping with the rock tradition exemplified in Wasted Time and latest single, Medicine.

Wild Roses is currently working on an EP of new material with Kent Lutt and Tone Tree Audio of Kearney.

The five-piece band plays classic country songs, and every song is a toe-tapper.

“If you can’t dance to a song, we don’t play it,” singer and guitarist Doug Powers said. “We look for songs that makes feet happy.”

Featuring the sweet sound of Randy Hartman of Thedford on steel guitar, the band has been well-loved throughout the area, including the last four Music on the Bricks celebrations.

“I don’t believe we’ve ever played a gig without a steel guitar,” Powers said.

Mike, Tracy and Tommy belt out hits that people know and love and are in great demand this summer in North Platte and the surrounding area. The original members Mike and Tracy Curtis started performing in Omaha in the 1990s.

In 2019, Tommy Vieyra of North Platte joined on percussion.

Their first performance in North Platte was to a full house at the Espresso Shop.

The Pearls are motivated by love of music and the healing it can give to those who need it most.

On Saturday, there will be plenty of kids’ games, including a bounce house, bean bag toss, face painting and bubble blowing. With food from Rowdy Rott BBQ, Chuck’s Wagon, Early Bird and Second Mouse, as well as a dozen or more sidewalk vendors. Bring a lawn chair.

At 8 p.m. Saturday, the Downtown Association along with other key partners will officially cut the ribbon on the renovations along Dewey St. today. The association will receive a state award from MainSteet Nebraska officials, as well as the benefit of a mayor’s proclamation.

This year’s Music on the Bricks festival is organized by the Bulletin, the North Platte Noon Rotary, the Good Life on the Bricks restaurant and Original Town. Kwik Stop and Allo Communications are the leading sponsors.