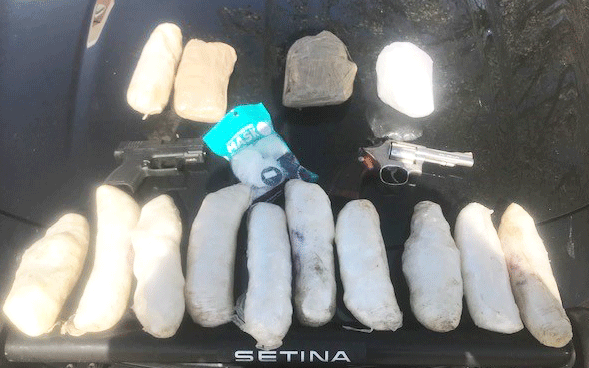 On Nov. 5, state troopers pulled a vehicle over on I-80 near Giltner and found 14 pounds of methamphetamine and two handguns.

At approximately 8:40 a.m. Nov. 5, a trooper found the methamphetamine and handguns during the traffic stop, and arrested two residents of New Mexico who were in the vehicle.

The U.S. Drug Enforcement Agency joined the investigation, which grew to include other states.

Oscar Garfio-Zapien, 28, and Rosaura Rodriguez-Perez, 33, both of Albuquerque, were initially charged with meth possession, possession with intent to distribute, and possession of a firearm during a felony drug violation. They were incarcerated in the Hamilton County jail.

The next week on Nov. 14, a Hamilton County employee reported that three people came to her home, offered money to release the prisoners from jail, and threatened her if she didn’t help them.

Thomas said the Aurora police found the subjects and took them into custody. He said Brayant Espinoza, 20, is charged with bribery, conspiracy to commit a felony, aiding and abetting the consummation of a felony, permitting or facilitating an escape and making terroristic threats.

Two others, Olivia Hernandez, 19, and Anderson Capellan Toribio, 21, were charged with aiding and abetting terroristic threats.

All three were placed in Hamilton County jail, and the two suspects who were arrested on Nov. 5 were transferred to other county jails, Thomas said.