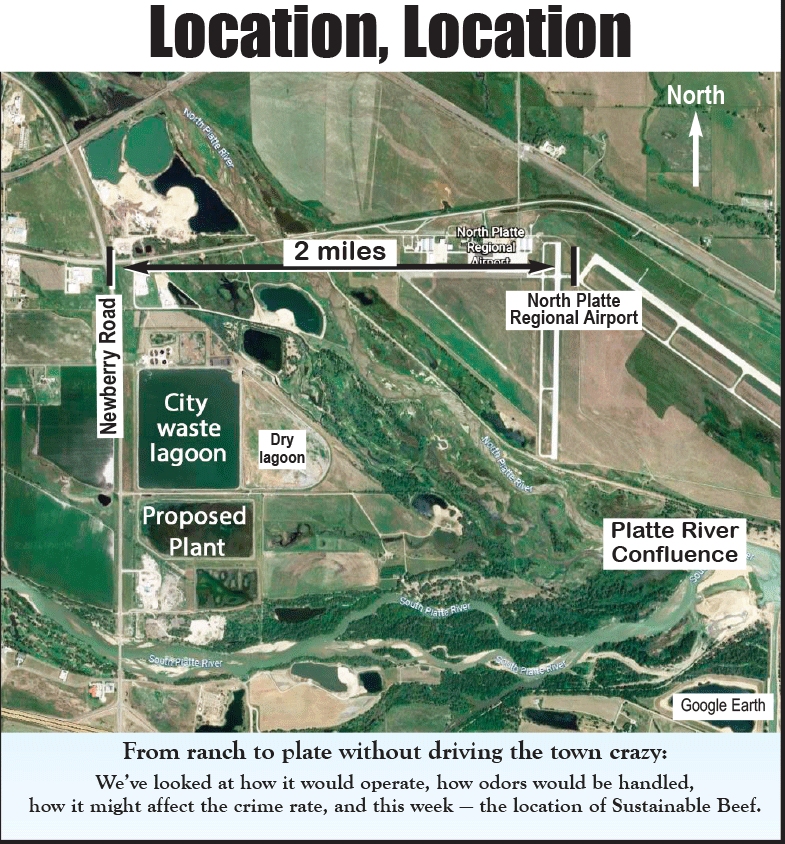 Overhead view of the potential location.

The proposed Sustainable Beef processing plant will move back into the public eye on Monday, when company officials meet with the advisory committee of the North Platte Quality Growth Fund.

At stake is $1 million in incentives to help in the preliminary steps of developing a $325 million beef processing plant on the east side of North Platte.

Chamber Executive Director Gary Person told the Bulletin that half of the $1 million would come from Northwestern Energy and half from the Quality Growth Fund, if the citizen’s committee recommends it.

The meeting is set at 10 a.m. To allow for a bigger audience, it will be held in the North Platte city council chambers at City Hall instead of the Chamber of Commerce building. The Chamber room accommodates about a dozen people. The council chamber holds about 50. City Hall is at 211 West Third. The meeting will be broadcast on the city’s Facebook page and YouTube.

Then, the city council would have to approve the grant before it could be awarded.

However, not everyone is happy with the prospect of the Sustainable Beef plant.

In a recent letter to the news media, elected officials and regulatory agencies, North Platte resident Dee Fugate said the entire area where the plant would be located is a wetland.

This plant would sit on top of a dry sewage lagoon that is no longer in use. She notes that there are two rivers – the North and South Platte — on each side. The rivers come together less than a mile east downriver called the Points, also known as the confluence.

Three homes are located near the Points. Fugate said the rivers the lowland floods every 2-4 years. She said she has helped sandbag the homes during the periodic floods of the last 40 years.

“Sometimes those residents have to use a boat to reach Newberry Road,” she said.

Fugate also said the packing plant waste will connect to the city’s working sewage lagoon. The plant, if it goes forward, would be located atop 4-5 feet of fill dirt, inside one of the dry lagoons that is no longer needed by the city because it has been replaced by more modern aeration equipment.

City officials agree with Fugate that wastewater from the plant could be pumped into an active lagoon and mix with city wastewater.

Fugate said it would take only one flood of the right conditions to weaken the berm and release waste from the plant into the land and river below, contaminating the valley and rivers as well as “the wells, the fish, pets, wildlife, farm animals, the birds that use the wetlands for habitat and the towns east of the river.”

However, officials point out that the bottoms of the lagoon and insides of the berms are made of heavy clay that is virtually impermeable. Despite floods in that area over the years, the berms, which are 8-10 feet high, have never breeched and there is no reason to expect they will in the future.

Regarding wells, the city’s contracted engineer, Brent Burklund, said underground water is in layers, separated by “hard pans” of sandstone. He said drinking water wells pull water from the lower layers, not the layer of water nearest the surface. That provides protection against floodwater contamination.

Fugate also told the Bulletin she’s worried that the weight of trucks and heavy equipment, and perhaps the plant itself, would take a toll on the soil, and the berms and overall terrain will sink over time.

But Burklund said the footings can be made solid. He said raising the ground level four feet will bring the building out of the 100-year flood plain, and another foot would be added for good measure, per environmental requirements.

Burklund said wastewater from the plant will eventually be pumped into the city wastewater treatment plant, and from there, into the river. He said the plant’s wastewater could move through the city’s existing lagoon, or through a wastewater main pipe that runs along Newberry.

Burklund said the quality of the water when it comes out of the treatment plant is monitored by the Nebraska Department of Environmental Quality, and to meet requirements, the city will impose requirements on the packing plant.

“Where but on more wetland?” her letter says.

The city council has previously considered this. In a work session with the council, Burklund said the city plant can double in size on its existing property, regardless of the beef plant.

Chamber of Commerce and Development President Gary Person also points out that the berms have never breached. He said critics have suggested that the plant be located somewhere else, but it has to be inside the city limits to qualify for tax increment financing, and without TIF, the organizers say they cannot build.

Person also said the location provides a buffer zone from most other buildings, and ready connections to city utilities and highways.

Person said the location along Newberry makes sense from an economic development standpoint, and also makes sense when it comes to environmental concerns.

After action on the topic of a $1 million grant for Sustainable Beef, the Quality Growth Fund committee will hold a separate discussion about the other big development on the table — an industrial rail park near Hershey.

The Rail Park has sparked excitement in the development world.

Chamber and DevCo President Gary Person said his office has received 10 requests for information since December from companies that are interested in locating in North Platte. Eight of those companies are specifically interested in the rail park.

Person plans to ask the proposal before the city council soon to put North Platte in line for state funds to develop the park by allocating city money for matching funds.

So far, the public has voiced no objection to the Rail Park.

It would be a place where manufacturing or distribution companies can ship their products by rail.

(This report was first published in the Bulletin’s July 7 print edition.)