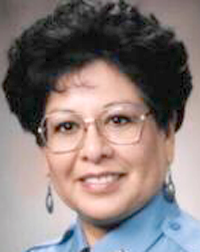 Mary DeLuna-Dailey, 76, of North Platte peacefully passed away surrounded by her family on Sept. 30, 2021 at Heritage Health “Memory Support” in Grand Island where she has resided for the past three years.

Mary was born Feb. 25, 1944 to John and Ysabell (Torres) Segura in Morrill the 9th of 13 children. Mary graduated from Morrill High School in 1962 and attended South Dakota National School of Business where she earned her associates degree.

She returned to western Nebraska where she met Henry DeLuna of McGrew and worked at the Scottsbluff Star-Herald. Mary and Henry were married on May 29, 1967 and to this union two sons were born, Edward (Tricia) of Panama City, Fla. and Anthony (Brooke) of Mission Viejo, Calif.

Even after retirement, Mary continued spoiling the department every Friday with homemade breakfast burritos. She married her long-time friend Edmund Dailey. She joined Edmund, participating in numerous horse shows, joined in the “Single Action Shooting Society.” They traveled different states and enjoyed their trips to Mexico. Edmund and Mary were “snowbirds” in Arizona for many years.

Mass of Christian Burial will be held 10 a.m., Tuesday, Oct. 5 at St. Patrick’s Catholic Church with Rev. Josh Brown as celebrant. Burial will follow the service at North Platte Cemetery. Visitation will be noon–5 p.m. Monday, Oct. 4 at Adams & Swanson Funeral Home, which is in charge of arrangements. A rosary will be held later at 7 p.m. at St. Patrick’s Catholic Church.

In lieu of flowers, memorial gifts can be made to the Alzheimer’s Association, in memory of Mary DeLuna-Dailey. Online condolences may be shared at adamsswanson.com.