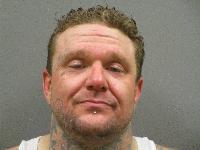 A North Platte man allegedly threatened an ex-girlfriend and rammed the back of her car on the road, earning him a cell in the Lincoln County jail.

Cassidy Sullivan, 37, is in jail, held without bond pending his court appearance.

According to the Lincoln  County sheriff’s office, Sullivan lured an ex-girlfriend under the pretense of running out of gas near Lake Maloney. He threatened her when she arrived, the woman told police, and not for the first time. He allegedly assaulted her four days earlier in McCook too.

The woman, who is pregnant, drove away, according to law officers. Cassidy allegedly followed in his vehicle and hit the back of her car at about 30 mph.

She headed toward the North Platte police station, while calling 911.

When a police officer tried to intercept Cassidy, Cassidy sped away, with police in pursuit.

As they neared the police station, police spokesman Matt Elder said an officer saw the man pull up next to the woman, make gestures and yell at her before he sped away. The pursuit lasted several minutes. The suspect drove recklessly and the pursuit was dropped near Fourth and Poplar to avoid endangering residents.

Cassidy remained at large for nearly four days, but police got a tip at 1:18 a.m. Monday that he was in the 100 block of N. Sycamore in North Platte . They saw Cassidy inside when they arrived. He was hiding in a closet by the time they entered the house. He resisted so they used a taser to subdue him.

They also found a hunting knife in his vehicle, as well as a syringe and a small amount of marijuana, according to a sheriff deputy’s affidavit filed with in Lincoln County court.

Cassidy is a convicted felon and therefore prohibited from carrying a deadly weapon, including a knife with a four-inch or longer blade. He has a record of domestic violence charges plus charges of drug possession and drug distribution, the sheriff’s affidavit says.

Cassidy is now charged with several crimes — assault with a deadly weapon, domestic assault, possession of a deadly weapon by a prohibited person, reckless driving, flight to avoid arrest and stalking, according to sheriff’s records.