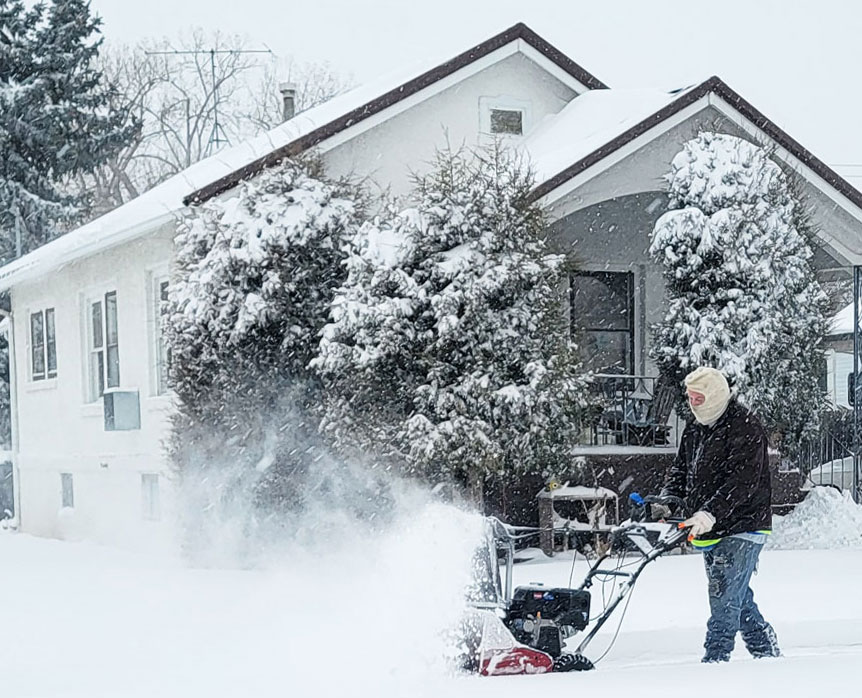 Schools across the area, the Lincoln County courthouse and most businesses closed tight and most people stayed inside Wednesday as more than a foot of snow fell in the North Platte area.

The snowstorm arrived around 2 a.m. Wednesday. Before dawn, I-80 and U.S. 30 were closed at Kearney and across western Nebraska.

Top Photo: Kevin Petska blows snow off his neighbor’s sidewalk around 10:30 a.m. Wednesday near E and Cottonwood in North Platte.

In addition to 7-8 inches that fell overnight, another 7 inches fell in some places on Wednesday, with northerly winds that reached 30 mph in the afternoon, the National Weather Service in North Platte said.

By 6:30 p.m., the National Weather Service at Lee Bird Field recorded 12.3″ of snow, a new single-day record during January at North Platte, and the third-highest single-day snowfall since 1875.

No overnight parking will be allowed along the storm routes nor in the core downtown area through Thursday night, city officials said.

The storm is cutting a wide path from southwest to northeast Nebraska, falling over most of the state. North Platte is in the middle of the path, but northern Custer County was expected to receive the heaviest amount, the weather service said.

Travel is hazardous and is not recommended. If you have travel plans, be prepared to alter or
delay them. Know before you go. Road conditions are updated at 511Nebraska.gov.

If you have to travel, pack a kit of emergency supplies, including water, winter wear, blankets, nutrition bars and other items you might need if you get stranded. If stranded or in need of assistance, call *55 or 800-525-5555 to reach the Nebraska State Patrol Highway Helpline.

Looking ahead, temperatures are forecast to remain below freezing at least through Sunday, so snow will remain on the ground at least for several days, the weather service said.