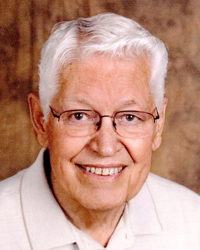 Lorence was born to William and Lydia Blase on March 5, 1932 in Hordville where he grew up. After attending Immanuel Lutheran School for eight years, Lorence went to Hordville High School where he graduated in 1950.

Lorence joined the U.S. Army in 1952 and served until his honorable discharge in ’54. He returned home and went to work in agriculture doing farm fuel delivery and corn seed sales for Dekalb.

After a few years, Lorence began his career in investments when he went to work for I.D.S. Financial Services in the Hampton area. He transferred to North Platte in 1971 with I.D.S., which later became American Express Financial Advisors, and eventually retired in 1997.

On June 15, 1956, Lorence was united in marriage to Marjorie Bamesberger at Polk. The couple was blessed with two sons, Douglas and Grady, and 56 years of marriage.

Lorence was a devoted husband and father. He and Marge enjoyed their retirement years traveling to Arizona during the winters. He was a faithful, Christian man and longtime member of Our Redeemer Lutheran Church. He served on various church boards and was a member of the American Legion and Optimist Club.

Lorence was quite a character; he enjoyed people and making them laugh, and looked forward to having coffee at Arby’s and visiting with the guys.

Lorence is survived by his son, Grady Blase of Lincoln; brother, Clarence Blase of Hordville; as well as many nieces, nephews and other family.

He was preceded in death by his wife, Marge, son, Douglas; parents, William and Lydia Blase; sister, Anna Driewer; and brothers, Herbert, Ervin and Carl Blase.

Cremation was chosen. Memorial service will be 11 a.m. on Saturday, July 24 at Our Redeemer Lutheran Church. A family inurnment with military honors will be in Floral Lawns Memorial Gardens.

In lieu of flowers, memorials are to LCMS World Mission, Lutheran Hour Ministries, Our Redeemer Lutheran Church or the donor’s choice. The memorial book may be signed online at odeanchapel.com or from 10 a.m.-6 p.m. Friday at Odean Colonial Chapel, which is in charge of arrangements.