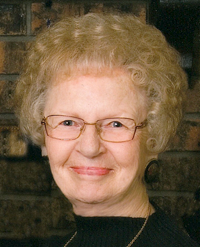 Lela was born Sept. 10, 1930 to Leo and Nora Dale in North Platte where she grew up. She graduated from North Platte High School in 1947.

On July 18, 1947, Lela was united in marriage to Grant Remus in North Platte. The couple moved to a newly purchased ranch at Wellfleet and later their children, Sheri and Jerry, were born.

The Remus family moved again in 1956, this time to his parents’ ranch in Wellfleet. Lela and Grant were active in the Wellfleet community and were members of the Community Club and Methodist Church. After retiring in 1989, the couple moved to North Platte.

Lela enjoyed ranch life and kept a daily journal of the going ons at the ranch. If something was broken and needed parts, she would be the one to go and get the parts. Lela was a hard worker and a good cook. Her fried bread, cinnamon rolls and chocolate upside down cake were family favorites. Lela loved her grandkids and liked playing bridge.

Graveside funeral service will be held at 10:30 a.m. on Monday, July 12 in the Wellfleet Cemetery with Rev. Dr. Douglas A. Delp officiating. Visitation will be 1-6 p.m. Sunday at Odean Colonial Chapel, which is in charge of arrangements.

In lieu of flowers, memorials are to LCRA (Loess Canyons Rangeland Alliance), a coalition of private land owners designed to improve rangelands for the future. The memorial book may be signed online at odeanchapel.com or at the graveside.