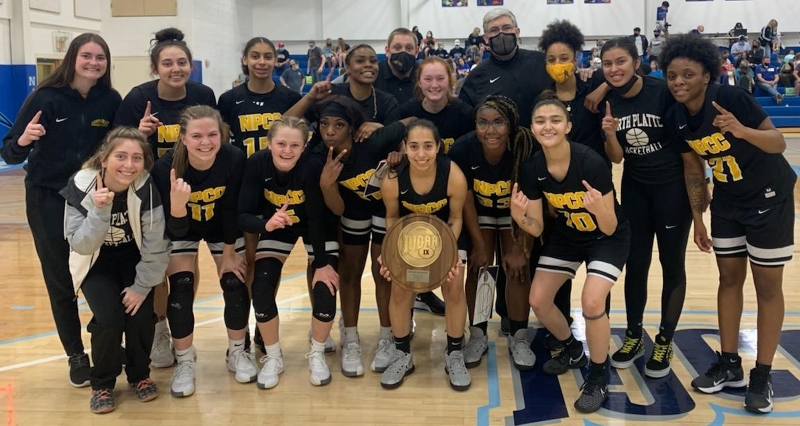 “I am extremely proud of this team and our student athletes deserve this Region IX Championship,” NPCC head coach Jeff Thurman said. “We are excited about our next challenge of playing for the District Championship and a chance to compete for a spot in the National Tournament.”

In the opening quarter, the Knights jumped out to a 4-0 lead on an offensive putback by Diamond Moore-Heath. Southeast rallied with a 9-4 run over the next three minutes to take their first lead of the game with 4:47 remaining in the quarter, 9-8.

The Knights responded as Moore-Heath was able to complete an up and under move in the paint, as the Knights retook the lead with 3:06 to play, 10-9. North Platte kept their momentum going and stretched their lead to seven on a Janay Brauer buzzer beating three at the quarter break, 19-12.

In the second quarter, the Storm cut the deficit to four in the opening thirty-nine seconds before Kayla Pope got her hands on a loose ball and took it in for a layup, 21-15. The Knights stretched their lead to eight on a Jordyn Moon layup with 3:25 to play.

Southeast cut the deficit to seven but Kanesha Hall scored on back-to-back possessions inside a minute to stretch their lead to eleven, 32-21. Southeast managed to cut into the deficit by connecting on a late three pointer, but the Knights still held an eight point lead at the break, 32-24.

Southeast used a 6-0 run to cut the deficit to four inside six minutes to play in the third quarter. An offensive rebound and putback from Moore-Heath halted the run and put the Knights back up by six, 39-33. The Storm and the Knights continued to trade points over the next two minutes, before the Knights extended their lead to eight on a mid-range jumper by Hall, 48-40.

The Storm trimmed the deficit once again down to four with 1:24 to play but the Knights pushed their lead back out to eight on a Brauer layup by the end of the third quarter, 56-48.

The Knights stretched their lead out to fourteen just four minutes into the fourth quarter, as Brauer drove to the basket and got her layup to fall, 62-48. Southeast went on a short 4-0 run over the next two minutes to cut the deficit to ten, with 4:33 to play.

North Platte was not done offensively and a strong defense limited chances for a Southeast comeback. The Knights outscored the Storm 7-2 over the final minutes and sealed their spot in the District championship.

Moore-Heath recorded her eighth double-double of the season, totaling 22 points and 17 rebounds in thirty-one minutes of action. Brauer and Pope rounded out the Knights double digit scorers with 17 points and 10 points, respectively.

The winner of United Tribes Tech and Rochester Community College in the Region XIII Championship, will play the Knights in the District Championship.

North Platte will host the District Championship on Saturday, April 10.