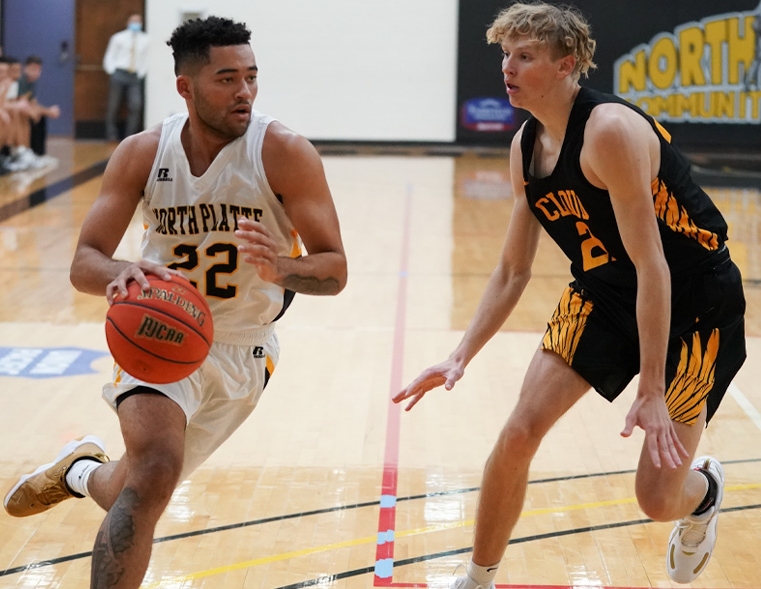 Niko Felici drives past Cloud County's Justin Graham in the first half.

The Knights jumped out to a 7-0 lead in the opening two minutes of action. Cloud County answered with a 6-2 run over the course of the next four minutes to cut the deficit down to three, 9-6. North Platte continued to battle on the offensive end extending their lead back out to six as Trevon Dennis connected on the back end of two free throw attempts, 12-6.

The Thunderbirds answered with a 14-5 run to take their first lead of the game inside four minutes to play in the first half. The Knights answered by earning back-to-back trips to the free throw line and connecting on three of four attempts to retake the lead, 22-20.

North Platte did not let up in the closing minutes as Nico Felici added the highlight of the first half by pulling up in front of a defender and connecting on a mid-range jumper to extend the lead back to four, 24-20. The Knights and Thunderbirds traded buckets in the closing minutes, but it was the Knights who clung to a two-point advantage at the break, 28-26.

The Thunderbirds continued to battle cutting the deficit down to seven with 5:03 to play in the second half. A free throw line jumper followed by a step back three pointer by Danilo Matovic quickly extended the Knights lead to twelve, 57-45.

The Knights defense limited the offensive chances for the Thunderbirds down the stretch and sealed the season opening win.

Timur Krupalija finished the night with a double-double tallying ten rebounds to go along with his 13 points. Plotnikov and Matovic rounded out the Knights double-digit scorers with 16 and 10 points, respectively.

The Knights (1-0) will continue their four-game homestand on Wednesday as they host Colby Community College. Tip is set for 7 p.m. at the McDonald-Belton Gymnasium.