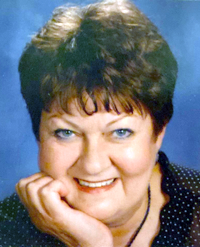 Julie was born July 18, 1949 in North Platte to Donald Vincent and Darlene V. (Farrell) McMurtry. She grew up and went to school there, graduating from high school in 1967.

While volunteering at the local senior center in 1974, she met Jess Caudillo in North Platte while Jess was the Parks and Recreation Director. Together they moved to Albuquerque, N.M. where they were married on July 17, 1978.

From there they took their family to Moscow where Jess was a professor and Julie would eventually be a beloved hair stylist, graduating from Mr. Leon’s School of Hair Design in 1982. Julie would eventually open her own salon, Hair Etcetera/Studio 2000 with her sister Janet. She was a cosmetologist in Moscow for over 35 years.

Julie was an avid gardener, who loved nothing more than being in her backyard with friends and family. She was an exceptionally active member of St. Mary’s Church and St. Mary’s School, and her love for these two entities was immeasurable. Julie was active in the Elks Women’s Auxiliary and was also involved with St. Vincent de Paul charitable works.

Regardless of where she was, her smile and friendly demeanor would make the place a little brighter.

She was preceded in death by her mother in 1972.

Come join us for a celebration of life for Judy McMurtry (Julia Caudillo) at the Moose Lodge on Saturday, July 17 at 3 p.m. where dinner will also be served.