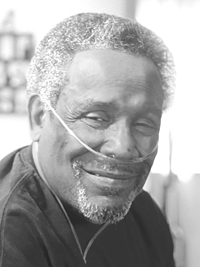 James was born Oct. 7, 1945 in Floydada, Texas to George and Isabell Thornton. He grew up in Omaha where he attended Omaha Public Schools and graduated from Tech High School.

On July 13, 1985, James was united in marriage to Kathy Hardnock at Jefferson City, Mo. They lived in North Platte until moving to Omaha in 2012. James and Kathy had just recently returned to North Platte where they were members of Harvest Christian Fellowship.

James worked as a upholsterer then for Prem Door and Walmart DC, from which he retired. He loved to sing, fish and play volleyball. He played on various leagues at the Rec Center and spent many hours on the water. James especially loved being surrounded by his grandkids.

Celebration of Life will be held at 2 p.m. on Friday, Sept. 23 at Harvest Christian Fellowship. Visitation is prior to services at the church. Cremation will follow the service. Odean Colonial Chapel is in charge of arrangements.