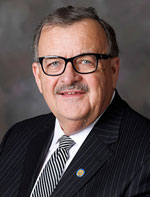 Jacobson at the Legislature: More bills, 2-person crew advocates should prepare to testify

It has been a busy week in the Legislature.

The Unicameral kicked off the week by debating the Committee on Committees report, which makes committee membership assignments.

The tone of the debate is an early indication of the strong divisiveness that we are seeing in the body.

Although the Legislature is nonpartisan, there will be a clear divide between the 32 conservatives and 17 progressives on controversial issues. And, since it takes 33 votes to invoke cloture (stop a filibuster), controversial bills may have a hard time getting to a vote. A motion for cloture is only accepted after full and fair debate, which is eight hours on the first round (general file). The more filibusters we have, the slower things get done.

This makes it important to get any relatively non-controversial bills out of committee and on the floor early.

Once the Committee on Committees report was approved, the committees began their business. I am happy to report that I will be serving on two standing committees — the Banking, Commerce, and Insurance Committee and the Natural Resources Committee.

I was also appointed to the Performance Audit Special Committee as well as the Statewide Tourism And Recreational Water Access and Resource Sustainability (STAR WARS) Special Committee (which looks at improvements at Lake McConaughy, the Niobrara River and the Lower Platte River between Lincoln and Omaha. –Editor).

I was honored to be selected by my fellow committee members as vice-chair of both the Banking, Commerce, and Insurance Committee, as well as the Performance Audit Special Committee. I look forward to working on bills related to economic development, health insurance, water, energy, tourism, and state agency oversight through my service on these committees.

The legislature also continued to introduce bills this week. To date, over 460 bills have been introduced and two days remain to introduce legislation. If history is any indication, we could see 200-300 more bills on Day 9 and Day 10.

In addition to statutory changes, more than a dozen constitutional amendments have been submitted.

If passed by the Legislature, a constitutional amendment would then appear on a ballot to be considered by voters. Remember, all bills will get a public hearing and committees will start holding bill hearings on Jan. 23.

Senators and committees have until March 14 to select priority bills. Each senator gets one priority and each committee two priorities. Speaker John Arch will also get to designate up to 25 bills as Speaker priorities. Because there is a limited number of priority bills, it is important not to waste your designation by prioritizing a bill that will stall in committee. Furthermore, it is sometimes possible to attach a bill to another priority bill through an amendment without having to designate the bill individually as a priority.

I will be looking for paths to a priority designation for all of my legislation and need your help in supporting my initiatives.

I have introduced 10 bills and co-sponsored another 14.

I have tried to focus my efforts on issues that will have a direct impact on District 42. As promised, the first bill that I introduced was LB 31, the two-person train crew bill. LB3 1 will face opposition from the railroads, so I encourage those who support this bill to provide oral testimony or submit written comments once a hearing is scheduled by the Transportation and Telecommunications Committee.

I am already reaching out to the committee members to encourage them to advance this important bill to the full Legislature so we can debate the merits of this important legislation.

Bill introduction will not end until Wednesday, Jan. 18. Any bill language sent to bill drafters in the latter days will likely not have enough time to be written into final bill form.

However, please continue to reach out with specific issues you would like reviewed. It may be possible to get these issues addressed by amending an introduced bill, or it may be our first great idea for 2024.

In this column, I will share important updates on my legislation and other bills of interest.

The public is invited to join a weekly call with the North Platte Area Chamber of Commerce and Development, where I will answer questions and provide live updates.

Subsequent call times may change as participants settle on the best day to meet. If others would like to schedule a regular forum in your area, please contact me to discuss times. It is important to me to hear from my constituents so I can better work on your behalf.

I look forward to a busy session. As legislation and issues arise, feel free to reach out to me at mjacobson@leg.ne.gov or 402-471-2729. My door is always open.