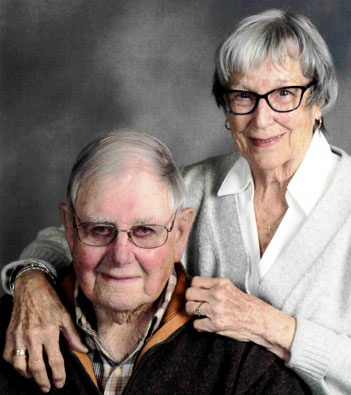 A Paxton-area family will forever be a part of Nebraska’s rich agricultural history.

Ralph and Beverly Holzfaster will be inducted into the Nebraska Business Hall of Fame on Feb. 2 for their contributions to agribusiness and community development.

According to the Nebraska Chamber of Commerce, Ralph spent seven years custom harvesting throughout the Midwest and experimenting with stubble mulch, a mulch made up of plant residue that mitigates erosion, conserves moisture, and adds organic matter to the soil.

During that time, he was able to prove its effectiveness on dry wheat land.

The Chamber said Ralph and the family was always active in the community.  He was on the board of directors for several organizations. From 1980-2004, he served for the Nebraska Ethanol Authority & Development Board as well as the Nebraska Public Power District.

He also served on the Keith County Economic Development Board and Foundation, the Mid-Plains Community College Foundation and he was a trustee for the Nature Conservancy and the Platte River Advisory Committee.

The family co-hosted the Cattleman’s Ball in 2013, a benefit to raise funds for the UNMC/Eppley Cancer Center.

Ralph currently serves on the board of the Mid-America Bio Energy Corporation of North Platte and MAAP Wheatland Ethanol, LLC of Madrid with corporate offices in North Platte. He has also worked with Natural Fibers Corporation of Ogallala to promote alternative crop production.

The Chamber said the family continues to be actively involved in agricultural and urban development and tourism opportunities. They currently manage Ole’s Big Game Steakhouse & Lounge in Paxton and the center pivot dealership in Ogallala. They also serve on the Dry Bean Commission, Nebraska Corn Board and the National Corn Growers Association.

This is not the first honor bestowed upon Ralph and his family. He was previously honored by the Aksarben Court of Honor, given the Nebraska Land Foundation’s Wagon Master Award and the UNL College of Business Alumni Association Business Leadership Award, the state chamber said.