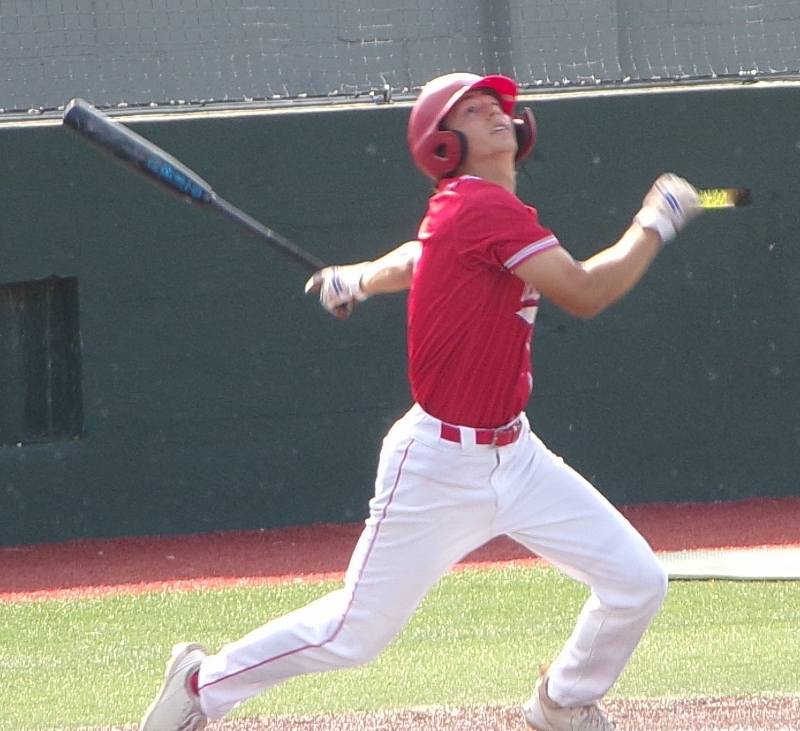 Tate Janas looks up at his foul ball in the fourth inning.

Hastings scored a run in the top of the eighth inning and held on in the bottom half to defeat the North Platte FNBO Seniors, 3-2, in the championship game of the Area 7 tournament at Memorial Field in Kearney

Both teams advance to the state tournament, which will begin on Saturday. North Platte (33-19) will play in the National division in Lincoln, while Hastings will play in the American division.

The district final was a pitcher’s dual between Creighton Jacobitz of Hastings and North Platte’s Tate Janas. Neither team scored in the first four innings. In the top of the fifth inning, Hastings went up when Tyson LeBar hit a two-run single into right field.

But Cole Wright led off the bottom half of the inning with a home run to left. Then with two outs, Tyler Tobey hit one to first baseman Luke Brooks. It was just far enough away from first for Tobey to beat Brooks to the base and the game was tied.

Both pitchers kept the game tied in the next two innings and it went into extra innings. Janas held Hastings scoreless in the top of the eighth. Jacobitz got one out in the bottom half before he reached his limit and he was relieved by Brooks. Brooks then got the next two outs to send it to the ninth.

In the ninth, Janas was relieved by Cody Wright. With the bases loaded, LeBar drew a walk from Wright to break the tie.

Brooks then retired the Nationals in order to win the district title.

“Obviously, we would’ve liked to have come on top there but either way, it was a great game by two good teams,” Seniors coach Ricky Holm said. “Tate came out and pitched his best game of the year. But that’s a good team over there. We played 19 innings against them in the last two games. We would’ve liked to have won it but as I told the guys, even though we didn’t win districts, we still have some goals we can accomplish. (They need to) keep their heads up and keep grinding. I’d like to make some noise at state this weekend.”