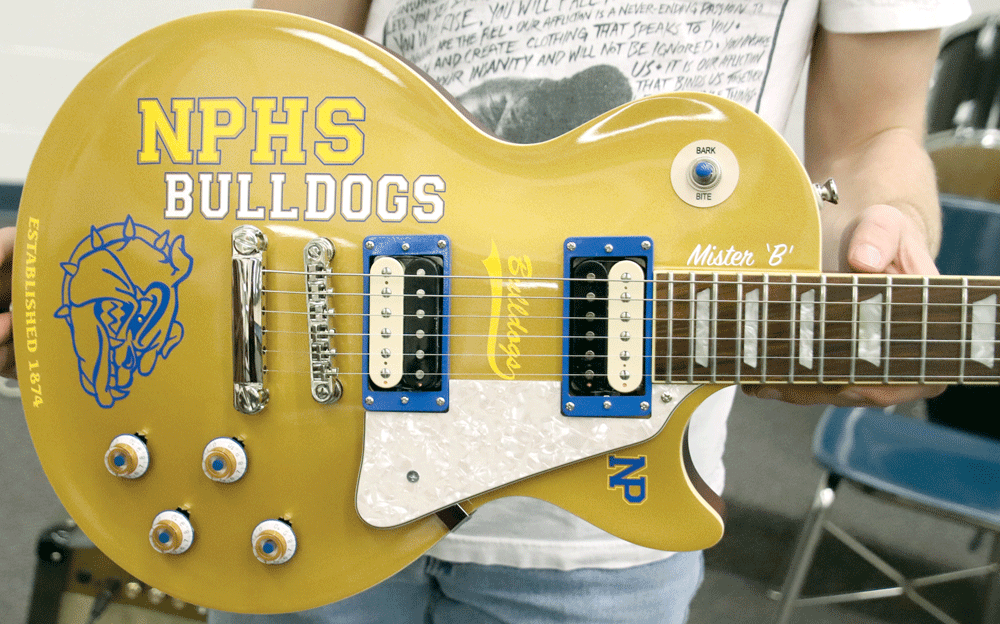 A member of the North Platte High class of ‘81, Roy wanted to give something to the program that sparked his love for music, while paying homage to his former principal and art teacher.

While Roy doesn’t play professionally anymore, in his time at North Platte High, his love for music urged him and a group of friends to form the band “Ball & Chain.”

“The very first experience we had was playing for the high school dance. We felt like rock stars,” Roy said.

Roy had the idea for this project about a year ago. About two months later, the COVID-19 pandemic hit the U.S., giving him more time to get everything together that he needed for the project. The guitar’s sparkling gold body was specifically purchased as the base for Roy’s project to Bulldog-ify the instrument.

With his experience from owning a graphics shop, he designed the vinyl decals that would bring the piece some personality. Roy also outsourced custom pieces to add to the guitar. He had blue and gold knobs made in Florida, a Poker chip/toggle switch made in Pennsylvania and a guitar pick, featuring the past and present high school building, made in Australia.

“Missing home and missing my friends made me want to give a little back,” Roy said.

As a “working man’s guitar” Roy wants the school to use it however they feel is best — whether that means playing it or displaying it for years to come.

The high school band director, Brett Bradley, said the instrument will not be regularly used to play music, but will be displayed in the school’s trophy cases for the majority of its life.

“We’ve had people who’ve gifted their instruments for others to use (which is nice),” Bradley said. “It’s such an honorary gift to ages past.”

To see the guitar in action, it will be played at the spectrum concert by the high school band, orchestra and choir on May 4 before returning to the school building to be displayed.

Top photo: The donated guitar. Click on image to enlarge.