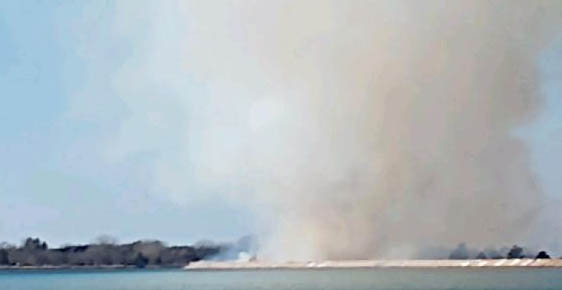 Firefighters from North Platte and nearby communities fought a large grass fire Friday afternoon on the north side of Lake Maloney in the area of North Lake Road and South Buffalo Road.

Firefighters battled the blaze for about four hours, Battalion Chief Jim Einspahr of the North Platte Fire Department said. No one was injured and only one structure — a power pole — was damaged.

Einspahr said the official cause has not been determined, but it is likely that something on a truck started two fires in the road ditch as it was traveling between North Platte and the transfer station. It could have been a bad wheel bearing or something that blew off the truck, he said. Solid waste is temporarily stored at the transfer station before it is shipped to a landfill to the west.

Einspahr said two separate fires were started along the roads, one of S. Buffalo and one on N. Lake. Firefighters focused first on the fire along S. Buffalo, where homes and buildings were threatened. A light wind blew the flames away from structures along N. Lake Road, into a grove of trees near the dam on the north side of Lake Maloney.

He said about 50-75 acres were burned. Smoke was visible for several miles in all directions. The call came in around 1 p.m. and the fire was contained by 5 p.m. The North Platte firefighters had plenty of help. Nine volunteer fire departments came from nearby communities.

Einspahr said there was preliminary communication with crop dusters who could help douse the wildfire, but they were not needed. He said fire crews would watch the smoldering trees overnight and probably into the next day to be sure the fire didn’t take off again.

He advises everyone to be extremely careful when working or playing outside, so as not to start a fire.

Conditions are extremely dry, he said, as dry as 2012, when there were multiple fires near the lake as well as in the North Platte River on the north side of the city, in addition to major fires in the sandhills.

“Our conditions have reached that point,” he said. “It’s going to be really dry until we get some snow.”