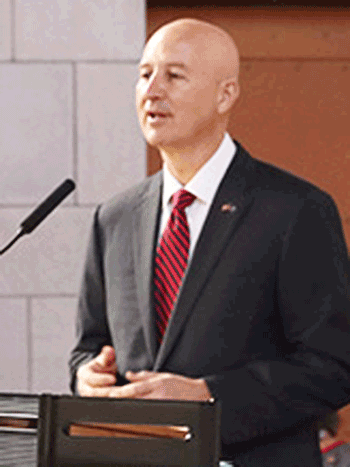 Gov. Pete Ricketts stressed the need to protect Nebraska’s share of the South Platte River again Thursday, when he presented his upcoming budgetary and legislative priorities in his State of the State address to lawmakers.

His top priorities include property tax relief, construction of a new state penitentiary and a new water reservoir system.

“Through the years, the guiding light of my administration has remained the same: to grow Nebraska,” Ricketts said. “And, despite weathering floods, fires and a global pandemic, we have done just that.”

By the end of the fiscal year 2023, he said, Nebraska is anticipated to have an estimated $1.5 billion in its cash reserve fund.

“This is the people’s money, and we must support tax relief that puts this money back into the pockets of the people,” Ricketts said.

Accelerating the phase-in of Social Security tax exemptions to five years, instead of the current 10-year period, would allow older Nebraskans to keep more of their hard-earned money, he said.

Additionally, Ricketts called for the individual tax rate to be reduced by 1% during the next five years.

Citing public safety concerns, the governor proposed spending $16.9 million to enhance the state crime lab and an additional $47.7 million toward expansion of the Law Enforcement Training Center in Grand Island, in addition to funds for a new state penitentiary.

“The existing state penitentiary was built over 150 years ago. Its walls are crumbling and its infrastructure has aged beyond simple repair. A modern facility will give our inmates a better quality of life,” Ricketts said.

The governor also recommended $500 million be spent on construction of a canal and reservoir system from the South Platte River to protect quality drinking water, keep electric generating costs manageable and ensure farm and ranch production. A bill to do that, LB 1015, sponsored by the speaker of the Legislature, Lincoln Sen. Mike Hilgers, was also introduced Thursday — The Perkins County Canal Project Act.

“If we fail to secure our supply from the South Platte River, we could expect to lose 90% of the water that currently comes to us from Colorado,” he said. “We must act to preserve, protect, manage and steward our water supply for our future Nebraskans.”

Finally, the governor proposed a number of one-time initiatives for allocating Nebraska’s $1.04 billion share of federal coronavirus relief funds from the American Rescue Plan Act. Among his priorities are securing funds for low-income children who have experienced learning loss due to the pandemic and funding behavioral health and nursing incentives.

“I look forward to the challenge, opportunity and honor of working with you,” Ricketts said. “Remember, Nebraska is what America is supposed to be.”