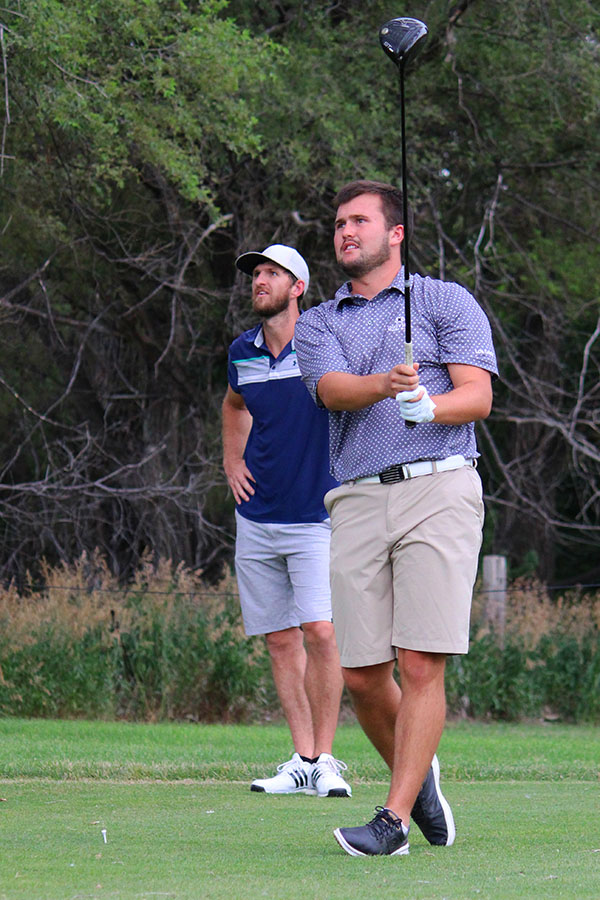 Kort Steele watches his ball after making his starting swing.

The annual event was held to add to the council’s donation to the Make-A-Wish Foundation, for which they also raised money earlier in the year at their Light Up the Night 5K, which raised around $9,000.

“The highest we’ve ever donated is $10,000, so this year we’re beating it,” said Student Council supervisor Ashley Werkmeister.

The fundraiser included a meal at Another Round before the golf scramble began.The event had a registration fee of $40 per person which covered the cost of the players food and the prizes awarded at the end of the day.

Mulligans and Magic Putts were available for each player for an additional $10.

While the event’s goal was to raise money, Werkmiester also hopes that the event was a good experience for the student council to get to know the community and gave the students an opportunity to give back.

“It never ceases to amaze me how much they care and how eager they are to help in the community as well,” she said. “I remember some of my seniors were terrified to talk to people. Now seeing them communicate (with potential sponsors) they’re going out and being okay with being rejected as well — it’s awesome.”

The NPHS Student Council will also hold a car wash July 25 in the Advance Auto parts parking lot at 1 p.m. to raise money for their upcoming school year’s expenses.

Photos by Sophia Walsh. Tap on images to enlarge