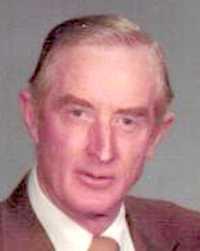 Glenn Arthur Cofer, local farmer/rancher for 64 years, passed away peacefully in the family home surrounded by loved ones on July 30, 2022.

He was born July 19, 1928 in Grand Junction, Colo., the youngest of three boys to Clyde and Alda McGeorge Cofer.

Glenn entered military service at the age of 17. Serving in the Army-Airforce where he was stationed at the 15th Airforce Headquarters, Peterson Airforce Base, Colorado Springs, Colo. Then he was transferred to Denver where he received his mechanical training. His rank was Sargent and he received his honorable discharge on February 2, 1949.

Glenn married Maurine Qualley, Oct. 19, 1947, First Evangelical Lutheran Church in North Platte. During the fall of 1950 they moved to Kansas City, Mo., where he worked two jobs at the same time, International Harvester Trucks and Crooks Warehouse as a truck mechanic.

March 1, 1956 the family moved to North Platte to begin farming/ranching and at the same time he worked for various mechanical shops and the UP-Diesel mechanic shop. He most enjoyed being in the sandhills building fence.

He was a Jack of all trades – vet, mechanic, plumber, electrician, carpenter, welder, tool inventor, etc.

He was a member of the American Legion, Eagles and Muzzleloaders. Over his life he sponsored 4-H bus summer tours, helped with horse shows, ushered at First Lutheran, traveled the US via bus trips and in their motorhome, also jeeping through the mountains of Colorado.

He is preceded in death by his parents, Clyde and Alda Cofer; brothers, Leland Cofer and Floyd Cofer.

Cremation was chosen. Graveside services will be held at 1 p.m., Monday, Aug. 8 at Fort McPherson National Cemetery near Maxwell with military honors. Pastor Patrick Sipes will be officiating.

Book signing will be from noon–5 p.m., Friday, Aug. 5 at Adams & Swanson Funeral Home, which is in charge of arrangements. For those who are unable to attend in person the service will be livestreamed at adamsswanson.com.